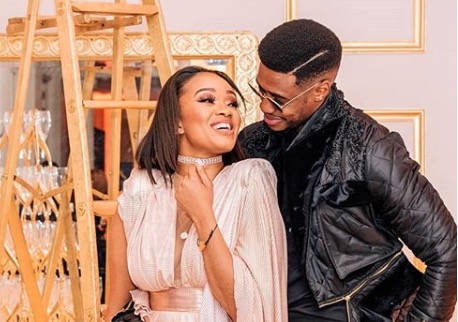 Solo and Dineo Langa spill the tea on what strengthens their marriage.
Image: Via Instagram

More than their love, Dineo and Solo's wedding special was celebrated for the way they captured just how much they value their spiritual side. Now, in their latest vlog, the couple have opened up about what spirituality means to them

Solo and Dineo said they knew from the first date that they gelled. The couple revealed that they later accepted their ancestral callings as sangomas, going through their individual journeys, but as a couple.

Solo revealed that accepting his spiritual calling was a difficult decision, but from a young age he's always known that he had a gift to explore.

Dineo shared that when she found out she had the calling, she had gone to consult about a totally different issue.

"For me, I had gone to check something totally separate. While that was addressed, then came this very heavy block of 'Hey, you are gifted - fanele o yo twasa.' My mind went spinning because I was like, 'What do you mean? It couldn't be. I don't know if this is a thing for me,'" she said.

Shona Ferguson to Connie: You are my rock sharp fede van toeka af

I call her the blueprint. This is the face of consistency, the definition of strength and humility.
TshisaLIVE
2 years ago

"It took such a long time for me to accept it - because there's you finding out and then there's you accepting it."

Dineo said she was grateful to have Solo by her side, because not only was he supportive but he also understood spiritual issues enough to help keep her grounded.

"We are black love, rooted in black spirituality. For me, when people say, 'Oh my God, you guys are so lucky,' I think it's through the guidance of our ancestors."

They opened up about going through the process of initiation together.

"For me, the biggest thing about this first year of marriage is that I've been happy," Dineo said.
TshisaLIVE
2 years ago

"Not everyone will be returning, including Kea and Jerry," Connie says.
TshisaLIVE
2 years ago

Sis was warming us up with her vocals during the rainy lockdown weather.
TshisaLIVE
2 years ago