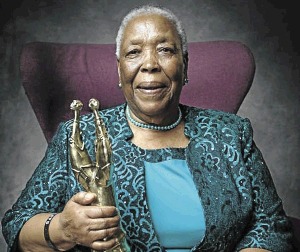 Veteran actress Lydia Mokgokoloshi is taking a break from acting after skyrocketing to fame with Skeem Saam.

The 80-year-old entertainer is renowned for her portrayal of matriarch Koko Mantsha since the soapie's inception in 2011.

The show told Sowetan yesterday that while viewers will see less of her on screen, Mokgokoloshi is still part of the show on a recurring basis.

Last Friday, fans were left wondering if they would ever see her character after she moved away from Turfloop in Limpopo, where the storyline is predominantly based.

It was explained in the storyline that Koko was going to her home for some peace of mind and to spend quality time with her brother Josias (Mahuma Rapetsoa).

“She will still be in and out of the story. She just won't be shooting as much as she used to,” said Skeem Saam spokesperson Sumaya Mogola. “Our shooting schedule gets really hectic at times and we don't want to wear her out.

“She is at a very sensitive age so she needs as much rest, care and comfort as possible.”

Mogola clarified that the decision for Mokgokoloshi's sabbatical was taken before the Covid-19 pandemic hit SA.

“The decision was made before lockdown, so I can't really say that Covid-19 is the sole reason,” Mogola said.

Born in the small village of Botlokwa in Limpopo, she was a schoolteacher for more than 20 years in Soweto.

In her late 40s in 1984 she decided to pursue her acting passion.

In 2017 Mokgokoloshi was introduced as a “national treasure” as she received the honorary Lifetime Achievement Award at the South African Film and Television Awards (Saftas).

“Thank you to all South Africans. You have loved me so much. I can't even walk and wherever I walk they all want my photo,” she jokingly said after receiving a standing ovation from her industry peers at the Saftas.

“Thank you to [the] Skeem Saam crew and all those who are playing with me.

“I really feel honoured to be called granny and I feel so proud to be a granny, though sometimes I can be so cruel and injure you with a needle pin.

“If you came into my house without informing, remember you can be injured somehow.

“I'm so happy and honoured. I honour those who are writing the scripts, dressing us and the production companies.”

When Big Boy gave Mantuli that pat on the back, it was over for her!
TshisaLIVE
11 months ago

IN MEMES | Lehasa has declared war but will he withstand Lelo’s wrath? — fans ask

Skeem Saam is clearly heading towards a fiery storyline!
TshisaLIVE
11 months ago

Fans heartbroken by Big Boy appearance on 'Skeem Saam', months after his death

We don't want his scenes to ever end.
TshisaLIVE
11 months ago