“I know I have lost a mother on earth but gained the most powerful ancestor,” said an emotional Somizi 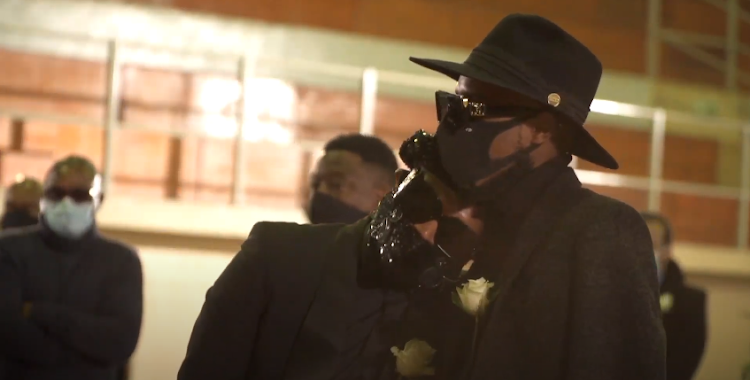 Somizi breaks down at the funeral of his mother, late veteran actress Mary Twala on Thursday.
Image: YouTube

TV and radio personality Somizi Mhlongo struggled to fight back emotions as he spoke at the funeral of his mother, iconic actress Mary Twala at Grace Bible Church, Soweto, on Thursday.

Mary died on Saturday at Netcare Park Lane Hospital in Johannesburg at the age of 80. She had been in and out of hospital for several months with illness.

Somizi, dressed in all black with a hat and embroidered face mask, sat with tears in his eyes as mourners paid tribute to his mother. He was comforted in the front row by his husband Mohale and daughter Bahumi.

Taking to the podium, accompanied by Mohale, Somizi said he had always dreaded the day he would have to speak at his mother's funeral.

“It is every child's nightmare. Finally it is here. It is the complete opposite of what I had in mind. In my mind I had planned to put one rose on the coffin ... now she is in the most beautiful coffin and decorations, because she asked for it.”

Mary Twala will always be remembered for her talent and contribution to Mzansi’s film and entertainment industry. In honour of a life well-lived, ...
Lifestyle
2 years ago

Somizi said that before Mary died on Saturday, she told the doctor she wanted a lot of flowers at her funeral and to be buried in the same dress she wore at Somizi's wedding.

He said his mother was a very successful woman at home and on screen, praising her work ethic, humour and humility.

“If I can achieve a quarter of what my mother has achieved, I have made it in life,” he added.

The star said it was difficult to say goodbye but he was “at peace”.

“I am not sad because my mother is gone but because the umbilical cord has been cut completely. I am so at peace with what my mother has achieved, she has seen me walk down the aisle. She has seen her granddaughters.

“I know I have lost a mother on earth but gained the most powerful ancestor. Don't be surprised if I rise beyond because I have the most generous ancestor ... I promise to never make you an angry ancestor. Thank you for everything. I love you.”

The Covid-19 pandemic limited attendance at the funeral to strictly 50 people, with mourners sitting a safe distance away from each other in a large hall. The service was limited to one hour and included messages from several friends and family.

"The doctor told her Somizi was on the way and she was so happy. All of a sudden she slipped away."
TshisaLIVE
2 years ago

"I’ve never seen my husband like this. Please pray for us guys. I really need to be strong for him."
TshisaLIVE
2 years ago