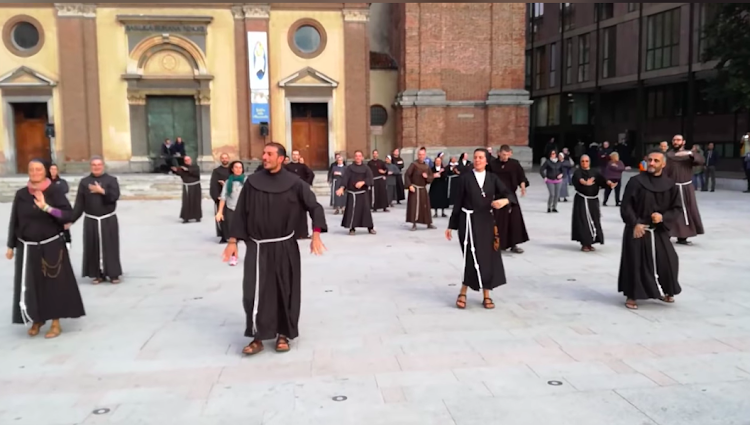 A group of priests and nuns in Italy taking part in Master KG's #JerusalemChallenge.
Image: Screenshot

Master KG's hit track Jerusalema continues to take the world by storm, months after its release.

Dubbed the next “Ayy Macarena” craze, the song has sparked a global dance challenge frenzy.

All around the world, people are taking part under the hashtag #JerusalemChallenge. The latest challenge is from a group of priests and nuns in Italy.

The group can be seen dancing in traditional Roman Catholic attire.

The video has been shared more than 75,000 times and has garnered over 1 million views on Facebook.

Master KG's original video, featuring Nomcebo Zikode, was released on December 12 and, due to the challenges, it has been viewed more than 46 million times on YouTube.

According to Master KG, the dance challenge started in Angola when a group of friends recorded a video of the dance choreography that has since gone viral.

The remix version featuring Nigerian superstar Burna Boy has also helped the song to become even more popular around the world.

The remix has peaked on music charts including the Billboard Hot Dance/Electronic Songs chart in the US.

It also peaked at number one on iTunes in Africa and in the top 5 in countries such as Spain, Belgium, Germany, Switzerland and Austria.

A number of inspired dance videos have been cropping up since the challenge frenzy started.

Here are the best five videos.

This Dance Really Deserves The Dance Of The Year🔥🔥🔥 #JerusalemaDanceChallenge pic.twitter.com/15NbOR7ZL6

The World Is Dancing 🙏🙏❤❤❤ #JerusalemaDanceChallenge When we created this song I never thought it will do this!!!GOD is amazing 🙏🙏 pic.twitter.com/3FCUBUKaQH

Thank You For The Love..🙏🙏❤❤❤❤❤ #JerusalemaDanceChallenge is Officially Recognized Worldwide 🙏 pic.twitter.com/us3tpcR83P

MUSIC: South African gospel song has the world dancing during a pandemic

Not only has Master KG’s track “Jerusalema” charted in over 10 countries around the world, the song has inspired the world to dance #JerusalemaDanceChallenge #COVID19 @AlJazeera @BBCWorld @cnni @ABC pic.twitter.com/A3ziXVrZRd

"Thank you for the love," Master KG said.
TshisaLIVE
1 year ago