An outpouring of tributes have flooded social media in honour of the former 'Muvhango' actress... 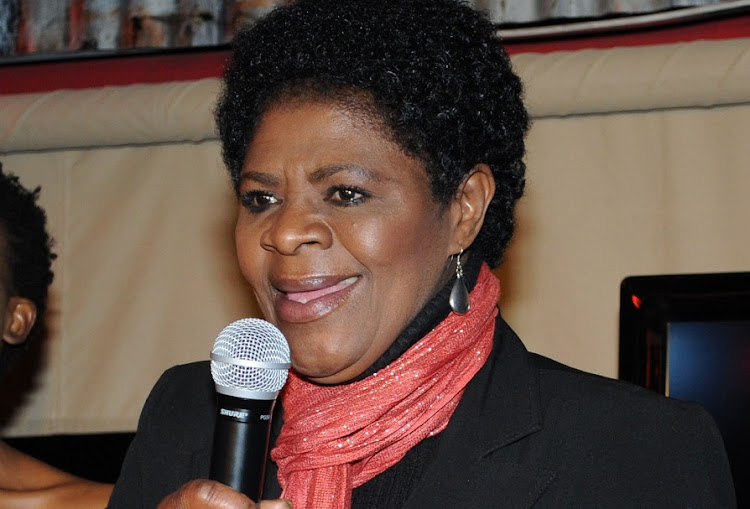 Fans, friends and family are heartbroken by the death of veteran actress Candy Moloi after a long battle with cancer.

The star, perhaps best known for her role as Vho-Makhadzi on the SABC2 soapie Muvhango, died on Tuesday at a hospital in Pretoria.

Her death was confirmed to TshisaLIVE by family spokesperson Nthabiseng Moloi.

"The Moloi and Ramunenyiwa families of renowned actor, radio producer and businesswoman Cecilia “Candy” Mukondeleli Moloi, sadly confirm her passing on the afternoon of July 28  2020 at a hospital in Pretoria. Her death follows a long battle with cancer. Candy celebrated her 67th birthday on February 10," she said in a statement.

She said the family was "devastated" by Moloi's death.

"Candy meant everything to us. She was larger than life. People fondly called her Makhadzi. She was Makhadzi for all of us. The wound is still fresh and everyone is trying to make sense of it."

She is survived by her son Tshepo Moloi, daughter Lerato Zah and two grandsons.

Candy will be buried in her home town of Thohoyandou in Limpopo, where the funeral will take place under Covid-19 restrictions.

The actress starred in several other major SA TV productions, including Thola, Shakespeare in Mzansi and Death of a Queen.

Veteran radio personality Tim Modise took to Twitter to share his heartbreak, saying the star had “opened doors and broke down walls” to create opportunities for others in the industry.

“It's sad to learn that Sis Candy is no more. She opened doors and broke down walls if necessary to let so many people in the media and marketing industry. A wonderful, generous soul,” he said on Twitter.

Actress Thandy Matlaila said her thoughts were with the Moloi family and Lerato, who is also a former Muvhango star.

“The only person on my mind right now is Lerato Moloi. Like I can almost sense her pain,” Thandy wrote.

Penny Lebyane recounted how Candy was always honest and loving.

“My heart is broken. The immaculate Mama Candy Moloi is no more. When I shared my story about postnatal depression in True Love magazine in 2005, she shared her experience in the 1970s and how no-one understood what she was going through as a young mother. She smelled lovely always, and gave love.”

The #CreativeIndustry Family has lost a mother again. A family is left with a matriarch. Mama #CandyMoloi was not just a mother to her biological children but to some of us too who our mothers are not in this industry. I am thankful for the moments we connected as two generations of women who found similarities in our rural and township backgrounds. She encouraged me as a single mother when I shared about my #PostNatalDepression after the birth of my son as a @truelovemagazine covergirl. She was proud of me about my courage to use my voice to speak about a so called taboo subject back then, she said it brought her so much healing cause she had a similar experience as a young mother and the was no information or discussion around it when she gave birth in the 70’s. I was in tears and every time we met wether in studio when she had booked me for a Sepedi voice over or around as she was picking up a grocery or at industry events we always chatted about something or the other about life, motherhood and working for yourself as a women. She always smelled lovely l teased her always about her perfumes and style. Oh Lerato and my boy Princey the whole family in JHB and Venda 💔 its so devastating to have learned about #VhoMakhadzi’s passing. My prayers, love, strength during this really difficult time. Mama #CandyMoloi may your beautiful soul rest in peace🙏🏼

The End of Chapter of life, The beginning of a New Eternal Life Chapter.

Rest in Peace Mama Candy Moloi, thank you for keeping us entertained in our homes.#RipCandyMoloi pic.twitter.com/HGrqKy3f9A

We normally call venda women "Makhadzi"... This is the real Vho Makhadzi... the entertainment industry is losing people😭😭😭 Condolences to Lerato Moloi and her family.#RIPCandyMoloi pic.twitter.com/EBr9hwqMG7

Known for portrayal of the beloved Vho-Makhadzi on Muvhango. Sincere condolences to family, friends and colleagues. #RIPCandyMoloi pic.twitter.com/wvrRjerWSr

She is the reason that all we Venda women are called Makhadzi 💜 and personally a family friend and fellow Thohoyandou block P native,Rest in peace Vho Mukondeleli Candy Moloi and condolences to the Ramunenyiwas and Molois 🥺🙏🏽#RIPCandyMoloi

We have lost another actress my condolences to the family and colleagues. Candy Moloi played the character of vho Makhadzi on SABC 2 telenovela Muvhango. May her soul rest in peace. pic.twitter.com/g7JUEAvZJS

Amampiano DJ Papers 707 has been laid to rest in Soweto. Here are three moments from his funeral.
TshisaLIVE
1 year ago