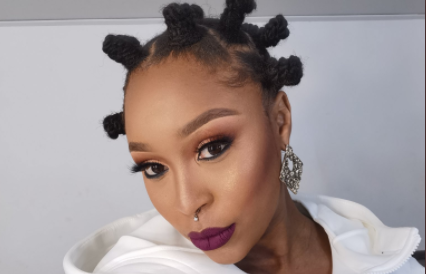 When TV personality and media mogul Minnie Dlamini took to Twitter to show off her new look, the last thing she probably expected was to get heat which resulted in her topping the Twitter trends list.

The star sparked outrage and fierce debate on Tuesday night when she posted a pic of her wearing her hair in Bantu knots.

She told fans that “just because it's ghetto, doesn't mean it's not fabulous”.

Just because it's ghetto, doesn't mean it's not fabulous 💎 Loving my #BantuKnots pic.twitter.com/ai0khq0ldB

She also posted the same snap on Instagram alongside the caption: “I can go from lady to ghetto in a second #BantuKnots.”

While some, including Idols SA judge Unathi Nkayi and singer Kelly Khumalo, were all for the look, others dragged Minnie for her use of the word “ghetto” to describe the hairstyle.

They argued that the style was beautiful and worn by women around the world. They also argued that calling natural hair "ghetto" confirmed "the stereotype that black culture is inferior and barbaric”.

Minnie has not responded to the backlash.

As her name dominated the trends list, fans also flooded the TL with pictures of their own Bantu knots.

Imagine taking years to gain the confidence to wear natural hairstyles like bantu knots outside, just to come on here and see one of your faves calling it "ghetto". Minnie , girl. That post was NOT IT pic.twitter.com/AcQSvdwJaY

I took Minnie’s ‘ghetto’ post personally because in grade 5 I had Bantu knots and a white educator told me to take them out asap because I looked like I had ‘animal horns’ on top of my head. I loved my hair but she humiliated me like something was wrong with my hair. Ok?

I like Minnie man but this kind of thinking is the reason why African hairstyles aren't allowed in schools and are considered "ghetto" https://t.co/TMbjv3or6O

As beautiful as you may look your caption is misleading. I rocked this hair a while back but ghetto isn't it minnie ka gana. pic.twitter.com/kl1l1Vza21

Nothing ghetto about this hairstyle Minnie. pic.twitter.com/D6Y9yWkiuA

Minnie’s caption is deeply disappointing and hurtful to every black girl who has been labeled ghetto for their natural hair.

The level of disrespect and disappointment towards Minnie for labeling our hair as Ghetto is pathetic.

She should really never forget we’re her bread was buttered from. BLACK HAIR IS NOT GHETTO REPEAT AFTER ME pic.twitter.com/FpYI3sOO5y

Minnie must just take several seats, even international celibrities do the bantu knots but they don't refer to it as getto... But a fellow sis who grew up in them tryina act like they are getto🙄 pic.twitter.com/hN9wVCPNKD

There is nothing ghetto about this hairstyle, Minnie. It’s your hair. Your natural hair, that does not make it ghetto . https://t.co/mQJau2yLlg

Minnie Dlamini on being proud of her financial maturity

"I then thought long and hard about this purchase, then I decided against it," she said about thinking of rewarding herself with an expensive ...
TshisaLIVE
1 year ago