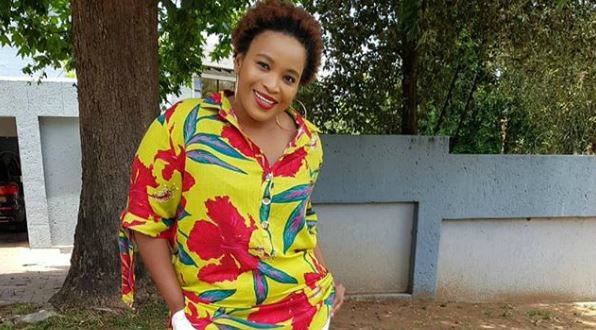 It is often said that life inspires art, but in the case of Ayanda Borotho, her art has inspired her life.

The actress is known for her role as Phumelele on the hit drama series Isibaya, and took to social media this week to gush over her character's strength and resilience.

Phumelele has been going through the most ever since she separated from her husband, Mpiyakhe. She was accused of having an affair with Advocate Fenyang Molefenyane and was crucified by the Zungu family, and even her own brother, without evidence.

She left with little to her name and started all over again, finding comfort in Fenyang's support.

Posting a snap of her with actor Aubrey Poo, who plays Fenyang on the show, Ayanda said that she was inspired by her character's strength.

“Lalelani bahlali, isesheli siyalindiswa, especially after a painful separation. I'm so glad Phumelele didn't use Fenyang to numb her pain or replace what was broken. She entered into this relationship, complete and enough for herself,” she wrote.

She said that Fenyang was in Phumelele's life because she wanted him, not needed him, and that it was a lesson for all who were watching their relationship unfold.

“She chose him. She found him worthy of her once she knew her worth. This decision is all about her. She owns it. She is fully in control of her choices. No family obligation, no cultural expectations and certainly no societal BS. Big difference. That's power,” she added.

Ayanda has always been about empowering women and motivating them to embrace their full worth.

Speaking to TshisaLIVE recently, Ayanda said she penned her best-selling book Unbecoming To Become, to cast off the shackles of her own struggles, and in turn inspired many others.

“It really was just me speaking my truth about what I saw in society but I also didn’t say women were ready to have these type of conversations which is why I didn’t say it would catch as much fire as it did.”

If there's a woman worth listening to this August, it's Ayanda Borotho!
TshisaLIVE
8 months ago

“I took a big nice chunk and ate it, and acted crazy so this guy would go away. That is what ended up happening, he left me alone.”
TshisaLIVE
9 months ago

'My daughter is one such queen. Train them young to own their power responsibly'
TshisaLIVE
9 months ago

‘Let's spread kindness ... every day. Church is not where we go, it is how the world experiences Christ through it’.
TshisaLIVE
10 months ago
Next Article