“Nasty C dm’d me months back about this, I was hella excited! Lol y’all must not bore me,” Thickleeyonce said. 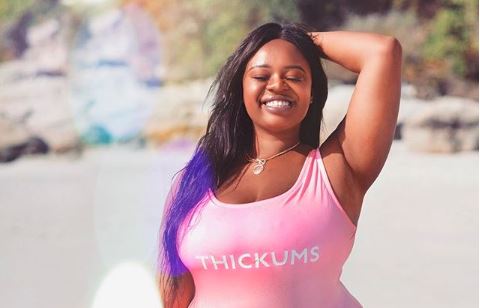 Thickleeyonce stood up for Nasty C after tweeps wanted to 'twist' his words.
Image: Instagram/Thickleeyonce

Plus size model Thickleeyonce came out in defence of rapper Nasty C, after tweeps heard him mention Thickleeyonce on one of his tracks and claimed he had fat-shamed her.

Nasty C finally dropped his much anticipated album, Zulu Man With Some Power, last Friday and while it has received general and global acclaim, tweeps went through it with a fine tooth comb and found a lyric they thought was “problematic”.

In one of his songs, Deep Pockets, which features Rowlene, the rapper spits, “My shirt like Thickleeyonce, it's all rounded/ Everybody jealous, everybody mad I read the secret, just to go shout it ...”

When one tweep tagged Thickleeyonce to celebrate her “name drop moment” another tweep asked why that line didn't raise red flags as fat shaming. Thickleeyonce quickly shared her thoughts and shut the tweep down.

“He literally just means that his pockets are as chubby as me. Also, he reached out to me before he put it on the song, he asked if I didn’t mind & I told him I was hella cool with it, I’m not offended by people calling me fat, I’m offended by people shaming me for being fat.”

And just in case they didn't get the message, Thickleeyonce said it twice ... you know for emphasis!

“Nasty C dm’d me months back about this, I was hella excited! Lol y’all must not bore me,” Thickleeyonce said.

Nasty C dm’d me months back about this, I was hella excited! Lol y’all must not bore me

Sis is just ouchea celebrating Nasty C and his success.

'Legendary' or 'take the L'? Here’s what the streets think of Nasty C’s new album

“Right now, I am taking a global leap. I am trying to go from being an African artist to being a global artist.”
TshisaLIVE
7 months ago

"I have to take so long before I decide whether to trust something or somebody because I don’t know if it is fake."
TshisaLIVE
7 months ago

"What f***** nonsense is this? Who let you think you’re that important?" Nasty C tweeted
TshisaLIVE
7 months ago
Next Article