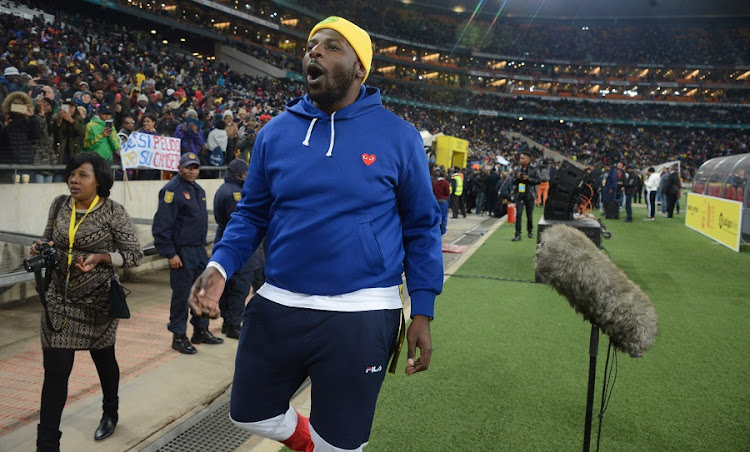 DJ Maphorisa has celebrated the change in lockdown regulations restricting concerts and events, announcing that his highly-anticipated Scorpion Kings Live show is back on!

The star had to put the show, which was set to take place at the Sun Arena in Pretoria on April 11, on ice when President Cyril Ramaphosa announced a hard lockdown and restrictions on travel and group gatherings, amid the coronavirus outbreak in March.

Ramaphosa announced the changes in restrictions to group gatherings when he addressed the nation on Wednesday on the government's response to the pandemic.

Under level one of the lockdown, entertainment venues will be allowed to hold gatherings at 50% capacity, subject to social distancing and other health protocols.

“Health protocols, such as washing or sanitising of hands, social distancing and mask-wearing, will need to be strictly observed,” Ramaphosa added.

The move was applauded by several musicians who over the past few weeks had demanded that government open up the entertainment industry.

DJ Maphorisa wasted no time in letting fans know that his concert would now go full steam ahead.

Sports presenter Robert Marawa made it clear that he was ready to party and said that Phori would lead the country into level one.

Taking It Easy hitmakers GoodLuck said the regulations weren't what they were before the lockdown happened but it was a start.

Yes pls 500 capacity live events!!! It's not back to where it was but It's a start 🙌🙌🙌 which party or festival have you missed the most?? . . . #stoked #excited #backtonormal #livemusic #bringiton #goodluckmusic #goodlucklive 🖤🖤🖤

However, comedian Nina Hasties warned those who were thinking of asking artists for a discount on their performance fees to not even try.

“I truly hope you all realise the importance of artists. Don’t any of you dare ask us for discounted rates in this season, we got the least financial support from government, and had the highest restrictions. Don’t you dare,” she wrote.

Musician Lady Zamar said not being able to see her family was the hardest part of the lockdown, while Bonang and actor Siv Ngesi celebrated the lifting of the ban on international travel.

Soon we will fly again my love! ❤️ pic.twitter.com/FwrNn73mhm

A small contingent of artists, musicians and creatives protested at the Union buildings in Pretoria on September 16 2020. The protesting artists say that government has not done enough to support an embattled industry during the coronavirus pandemic.

Trevor Noah on childhood in apartheid SA: I lived in quarantine in a lighter form

“As a child, I lived in quarantine in a lighter form. I couldn’t play outside with other kids. I had restrictions on my movements, and I wasn’t ...
TshisaLIVE
1 year ago

'The borders are closed but what about Black Coffee?’ - Sizwe Dhlomo splits Mzansi over Master KG advice

Sizwe defended Black Coffee jet setting around the world, while telling Master KG that the borders are closed
TshisaLIVE
1 year ago