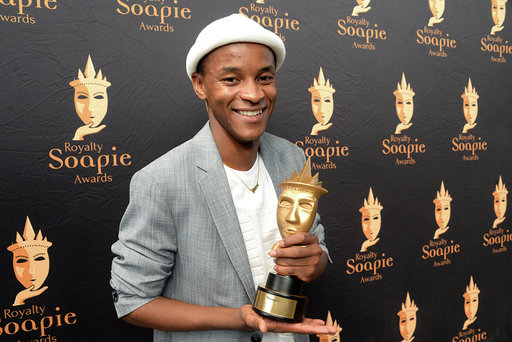 Gomora star Sicelo Buthelezi, who plays Teddy on the soapie, has been a fan favourite since he made his debut on TV and walking away with the Outstanding Newcomer award at the 2020 Royalty Soapie awards validated all his hard work.

In an interview with TshisaLIVE, Sicelo said he plans to use the award to motivate him to do even better.

He admitted that after the initial excitement of winning the award, he was worried about how having people constantly sing his praises would affect him.

“When it happened I was a bit overwhelmed. I was mostly worried about myself, that maybe I might drown in this pool of people congratulating me and applauding me every time. But then now, I'm just like, let me stick to my formation and not be drained or overwhelmed by it,” he said.

The young actor said a part of him still couldn't believe that he had won an award for his very first TV role. He said it was ironic that last year this time, all he could think about was whether he would be able to get a job after graduation.

His worst fear, Sicelo said, is climbing the mountain of fame too quickly and then failing to maintain being on top and falling. The young actor says he makes conscious choices every day to make sure that he works hard to maintain the excellence that won him the accolade.

“I am worried now that whatever next role I get, people are going to have high, high expectations. However, if this is God's plan for my life, so be it.”

Sicelo said he's not blind to the fact that perhaps it is his time and that God has placed him next to the right people to help him shine.

On his Instagram, Sicelo shared a snap of himself with The Queen actor SK Khoza. He explained what was going on in that moment that made it super special and one of the many highlights of his Royalty Soapie Awards night.

“SK literally spoke about Sicelo Buthelezi when he did his acceptance speech (for his award) and I didn't even know what to do because we had never even said two words to each other before that moment. It was so special ... When that happened, for me I was wow, it can only be God's plan,” Sicelo said.

SNAPS | Here’s how your faves showed up for the Royal Soapie Awards & who won!

Even without the usual star-struck audience, the event still had all the necessary glitz and glamour as actors and crew members dressed to the nines.
TshisaLIVE
1 year ago

IN MEMES | 'Gomora' fans want to know what game Buhle is playing!

Fans are afraid the Teddy, Buhle and Ntokozo "love" triangle will end in tears for Teddy.
TshisaLIVE
1 year ago

Actor Sicelo Buthelezi wants y'all to know he's not Teddy.
TshisaLIVE
1 year ago

Zodwa sure has a way with words...
TshisaLIVE
1 year ago