Cassper subtweeted his rivals saying they were using 'group work' to come at him ... 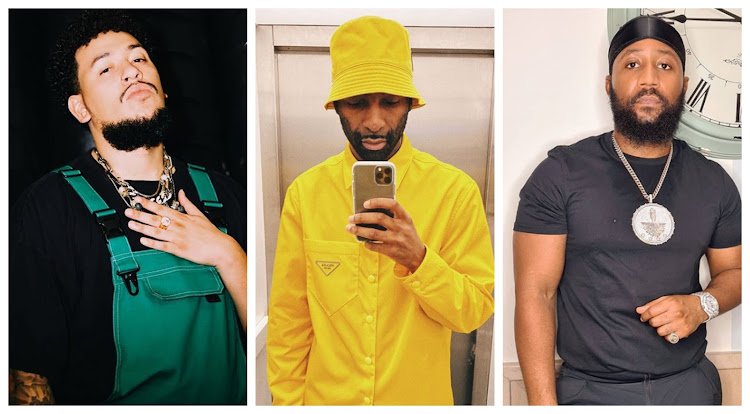 Riky once wrote a thread about how he's over the AKA/Cassper beef.
Image: Instagram/AKA/Riky Rick/Cassper Nyovest

First of all ... did any of you get a notification about Riky Rick moving up to AKA's “very limited” friends list? No? Okay, then tweeps weren't the only ones left shook by the revelation as they watched AKA sing Riky's praises among many other things this past weekend.

AKA spent his whole weekend on Twitter and y'all know what that means, right?

Clapbacks, sub-tweets and tons of content! He spoke about everything from soccer, to his upcoming album, to Kairo having more followers than most SA celebs and almost everything in between.

However, it was the praises for Riky Rick and under-the-belt jabs at Cassper Nyovest that caught the most fire on the TL.

Riky dropped two new tracks on Friday that received general praise from music lovers. AKA was among those who were left in awe of Riky's “hit making abilities” and he took to his TL to say as much.

“How do you come up with all these crazy catchphrases/hooks bro? @rikyrickworld ... hectic. I thought you loved me. Smh,” he said.

As he engaged with his followers, AKA explained that he was impressed by Riky's ability to stay relevant in the music industry by dropping one great summer banger each year.

How do you come up with all these crazy catchphrases/hooks bro? @rikyrickworld ... hectic. I thought you loved me. Smh

Riky is worse. He just pulls up every summer with a mean one then goes back to wearing pajamas. https://t.co/yY0WPjrrk3

Tweeps, who know all too well that Riky used to be Cassper's bestie, attacked AKA for suddenly showing Riky love and accused him of befriending “an enemy of his enemy”.

However AKA defended Riky's honour, saying the guy was not about the SA beefs or negativity.

“Nah. It ain’t even like that. Riky isn’t about that negative shit. I don’t roll like that. Example. Tido is tight with Tsibi (read Cassper) ... but he’s tight with me too, and I never press him about it.”

Any enemy of your enemy is your friend? 😳

Nah. It ain’t even like that. Riky isn’t about that negative shit. I don’t roll like that. Example. Tido is tight with Tsibi ... but he’s tight with me too, and I never press him about it. https://t.co/dK0oSyNYKs

Other tweeps weren't just shocked by the friendship between AKA and Riky, they were convinced that AKA and Cassper are secretly friends ... Yes, even though both Cass and AKA have explicitly expressed their heavy dislike (read “hate”) for one another.

One tweep jokingly said AKA and Cass actually had a nice bromance going on and said they are always giving each other publicity and nicknames among other things.

That's when AKA saw a chance — and took it — to claim that it was his creativity that actually gifted Cassper with a name for his fans. He said he came up with Tsibipians.

He also went on to explain what a “Tsibip” means to him ... and that he's apparently never listened to any of Cassper's album! Not even the diss track Dust To Dust that Cassper created in his honour ... *insert doubtful emoji here*

For us ... we interpreted it as like ... a tricky sitch. A glitch. A Tsibip. Lol. “Rockerfeller died of AIDS, that was the end of his chapter, and that’s the man you chose to name your company after?!?!” .... something like that. https://t.co/1uPVZwAucI

🤣🤣 to be quite honest ... I’ve never listened to any of his albums. Like not even one. https://t.co/HUzhW39Oto

Can you believe I’ve never heard “dust to dust” ... don’t even know what it sounds like. https://t.co/LFyQDAEfSt

Riky once wrote a thread about how he's over the AKA/Cassper beef.
Image: Instagram/AKA/Riky Rick/Cassper Nyovest