AKA denied breaking up with Nelli when a fan asked him on Twitter, saying, 'Hell Naw'.
Image: AKA/ Instagram

Hmmm, things seems to be good between rapper AKA and his girlfriend Nelli Tembe after they were at the centre of "trouble in paradise" reports over the weekend.

The couple, who openly profess their love, have done exactly that days after it was reported that things allegedly weren't so rosy between them.

City Press reported over the weekend that the Baddest hitmaker and his girlfriend got into an alleged lovers' quarrel.

In the wake of the report, AKA went about his business as normal. Nelli indirectly poured cold water on the claims by sharing loved up snaps of them on her Instagram Stories.

"He for keeps," Nellie captioned one of the snaps, to which AKA replied with "I love you" in the mentions. 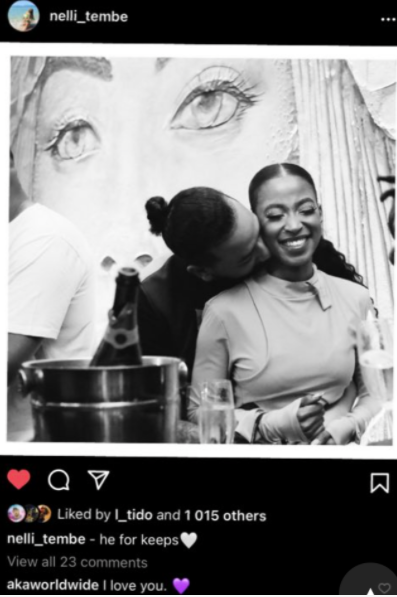 AKA and Nelli posted a picture of her and AKA cuddling on her Instagram.
Image: Nelli Tembe/ Instagram

AKA denied breaking up with Nelli when a fan asked him on Twitter, saying “Hell Naw”.

To prove how madly in love they are, a week ago, at the launch party for his latest limited edition drink Banana Cruz, the Supa Mega was seen cosying up with his bae during the celebrations.

AKA revealed that he and Nellie had written one of the songs on his latest EP together.

In an interview with Okayafrica, AKA said the collaboration on Finessin' with his girlfriend happened because she was in the studio when the song was being created.

He said anecdotes centred on his relationship appear in several songs, including Holy Water, Mr Perfect and Cross My Heart.

Midnight Twitter is so dangerous, both Cass and AKA probably don't know that there's #AKAJoinsFamailyTree trending!
TshisaLIVE
1 year ago

Tweeps weighed in on AKA's poll about Pro and Nasty C.
TshisaLIVE
1 year ago

AKA is totes smitten with Nelli Tembe, and there are receipts to prove it

We all want that AKA-Nelli kinda love!
TshisaLIVE
1 year ago

AKA & Kairo's pool hangout left tweeps in their #summergoals feels!

AKA is spreading that father-daughter love this summer!
TshisaLIVE
1 year ago