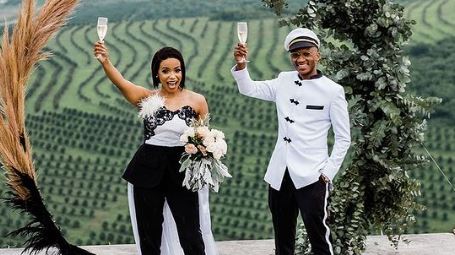 After dating for over two years, music producer Sipho 'Psyfo' Ngwenya has officially tied the knot to the love of his life, Aamirah.

The couple took to their respective social media platforms to reveal that they got hitched over the weekend at a small family affair.

“Officially Mr and Mrs! I could not have wanted a better partner to do this with. I love you very much Mrs Ngwenya,” Psyfo said.

Aamirah also took to Instagram saying Saturday, November 21, was the most beautiful day of  her life.

“I got married to my best friend on top of a mountain, in my home province and I don’t have all the words to express how happy and in love I am with this man who has been so committed and loyal to me.

“I have many interesting and funny stories to share about our special day. Overall, I can’t believe we did it mate.”

Since going public about their romance, Psyfo and his now wife had been heating up social media with their snaps and tributes to each other.

However, not everyone was happy for the couple when they first started dating.

In November 2017, fans criticised Psyfo for moving on “too quickly” from TV and radio personality Hulisani Ravele.

Psyfo and Hulisani dated for over 10 years and were often rumoured to be close to getting married. However, fans were shocked when they announced they had split.

While the majority of the responses wished Psyfo and Aamirah well, one user suggested he was wrong to move on from Hulisani so fast.

Feeling that the user was being unfair, Psyfo told her to focus on her life and not his.

“Please don’t be rude my sister. Let me live. You focus on your life and I will do mine,” he said.

Hulisani Ravele drops some pearls of wisdom: 'The sun will shine again'

Hulisani took her followers to church
TshisaLIVE
2 years ago

Psyfo pops the question to his girl Aamirah

Psyfo asked his bae Aamirah to be his wife.
TshisaLIVE
2 years ago

Inside Psyfo and Aamirah's special baecation

Stay in Jozi for what? Nah. Go collect them passport stamps.
TshisaLIVE
3 years ago