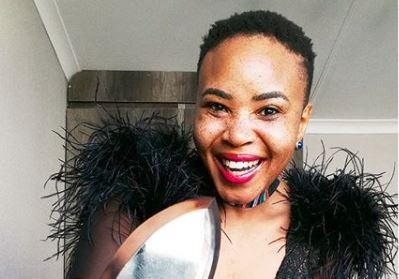 Media personality Hulisani Ravele preached self-love and chose to blue-tick the petty mess Twitter unsuccessfully tried to drag her into, when users made her trend just after her ex-boyfriend Psyfo announced that he got married.

The news of Sidwell's (previously known as Psyfo) wedding to his wife Amira dominated the TL on Thursday as the pair shared breathtaking photos of their wedding day and sweet messages of how it all went.

However, in true Twitter style, tweeps still found a way to drag Hulisani (known in her YoTV days as Cici) into Sidwell's good news. This is because Cici and Psyfo dated for a long time (about 10 years), since their teenage years as colleagues on the SABC1 kids programme.

They broke up suddenly but handled themselves gracefully, however fans of the couple never truly got over it ... So when Sidwell shared his new chapter on the socials, they couldn't help but make Hulisani trend.

After spending more than a decade with hulisani? After God, fear men https://t.co/xyai8l2HMN

I knew someone would bring Hulisani up. Guys let it go.....just let it go. We loved them as a couple back then but things don’t always work out the way we expect them to.

I hate how Psyfo 's story is just a reminder of how much of an extreme sport umjolo is. You could be with someone that long only for nothing to happen only for you to get engaged to someone else in a space of 3 months followed by a wedding. Umjolo is difficult bazalwane.

But moghel is truly not the same girl she was more than a decade ago and even though her name was on the trend list, sis went about her life like nothing was happening.

In fact, she took to her socials to preach a very important message of loving thyself.

Read her post, which is full of self-love wisdom, below:

Plus, while some tweeps have continually called their 10-year relationship a “waste”, Hulisani made it clear during an interview with Mac G in 2018, that she doesn't regard it as such.

'Don't you feel like he wasted 10 years of your time?” asked Mac G.

“No, what's the waste?” replied Hulisani.

“Here's the problem, when you set your benchmark and goal as marriage, kids and a house, you are not enjoying what it is right now. And I find that for so many of us because the goal is not at a relationship level, just as relating to one another as humans. It's, until I have a ring on it, it's not real. So what are you doing? At the end of the day, for me, a marriage is a relationship that just has a certificate attached to it,” Hulisani said.

Psyfo and Aamirah solidified their love for each other!
TshisaLIVE
1 year ago

Actress Hulisani Ravele wants people to be kinder to themselves

"You are allowed to have smallanyana (or even bigganyana) cries," wrote Hulisani.
TshisaLIVE
1 year ago