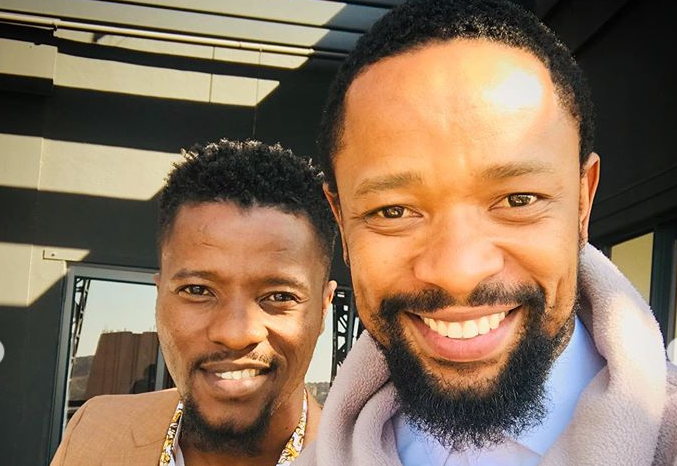 Since showing off their stellar acting skills in two of Mzansi's popular telenovelasy, brothers and actors SK and Abdul Khoza are over the moon to finally be acting together in an African action-packed series, Kings Of Joburg, which premiered on Netflix on December 4.

Kings Of Joburg is a six-part series that delves into legacy building, fragmented family structures, treacherous brotherhoods and the effects of crime and African masculinity on families and society at large.

In celebration of the series making its debut on Netflix, SK took to Instagram and shared a video in which he's seen making a toast with his brother Abdul and three friends at their private screening.

"We're making history not only on TV, but we're making history as brothers. We are the Khoza brothers who are from Kwa-Zulu Natal. Now, we're taking Africa to the world, baby. I want to take this opportunity to say that tomorrow we will officially be internationally known as the Kings Of Joburg."

Feeling super excited about the series, SK also posted an interview he did with his brother on his Instagram Stories. He said working alongside his brother was something they had always dreamt about while growing up.

"This is something we had always dreamt of growing up. I think it's similar to how we are in real life. I think I am crazier than him in person, but people get to see us act out our roles as the Khuzwayo brothers," SK said.

Speaking about his character, Abdul described Lester as a "bit of a cool cat" who wants to take over Joburg from brothers Simon, played by producer and actor Shona Ferguson, and Mo, played by veteran actor Zolisa Xaluva.

"I like to get organised when I do these things, so basically I am almost, sort of like, the brains in our family, the Khuzwayos. I run Cape Town and I eventually plan to come to Joburg and take over everything.

"Simon happens to run Joburg with Mo and I am the one who is trying to grab it out of their hands. I take the biggest risks because I go against the biggest guy we have on the Kings Of Joburg."

TK Sebothoma, Buhle Samuels, Tsholofelo Matshaba and Cindy Mahlangu are other familiar faces fans will see in the series.

Is SK Khoza in love again? Looks that way to fans...
TshisaLIVE
1 year ago

LOL! SK Khoza has the perfect solution for viewers who feel awkward to watch 'The Queen' with parents

SK balances a tweep on what to do when watching TV with his parents.
TshisaLIVE
1 year ago

All SK wanted was the food he ordered...exactly how he ordered it to be, but alas... #PriceOfFame
TshisaLIVE
1 year ago

“I remember we used to watch you acting on 'Yizo Yizo' when we were young ... you influenced our acting”
TshisaLIVE
1 year ago