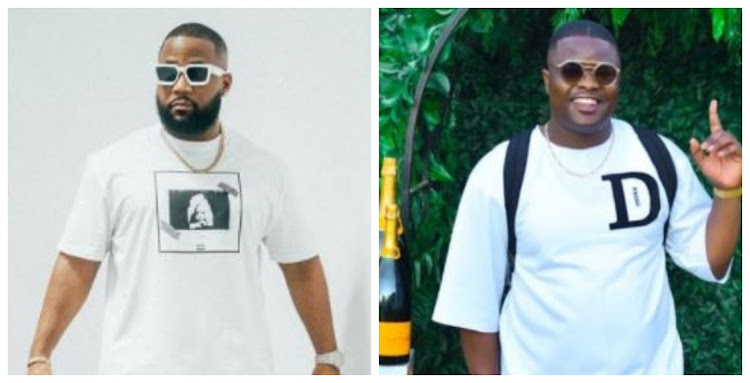 Cassper Nyovest and DJ Sumbody have poured cold water over claims that they're embroiled in a legal battle, allegedly over unpaid royalties.

This after, Sunday World reported that Cassper and his company, Family Tree Entertainment, were accused by DJ Sumbody of allegedly defrauding him of royalties for songs they collaborated on.

While the reports sent the rumour mill into overdrive, Cassper shared a video of himself with DJ Sumbody on Instagram Stories, laughing off claims of a possible “royalties feud” between them.

In the beginning of the video, Cassper can be heard asking DJ Sumbody why he was suing him, to which Sumbody responded, “You really think I could sue you?” with a smile on his face, saying the paper was trying to “make money” by using their names.

Cassper added that the publication claimed that he [DJ Sumbody] was disgruntled about “unpaid royalties”, to which DJ Sumbody told Cassper not to worry about the allegations, stating that their partnership was solid and would not be ruined by “false reports”.

Cassper also shared parts of his video with DJ Sumbody on Twitter.

DJ Sumbody also took to Instagram to deny the “lawsuit”.

When contacted for comment, Cassper Nyovest's team referred TshisaLIVE to DJ Sumbody, as he was the one who was reported to be “doing all the suing”.

DJ Sumbody had not given comment at the time of publishing this article.

Cassper Nyovest says the world is 'hurt' so 'it's every man for himself!'

"Why rely on a world full of trauma? The conversation in your mind is the most important," said Cassper.
TshisaLIVE
1 year ago

Cassper Nyovest on AKA boxing match: 'I can't wait to get in the ring with small boy'

Cassper Nyovest believes his boxing skills will knock AKA out!
TshisaLIVE
1 year ago

The music video got a 'yasss' from Cassper's fans!
TshisaLIVE
1 year ago

"Y'all killing your own credibility and the culture is also going to the pits," said Cassper.
TshisaLIVE
1 year ago