WATCH | Buhle Samuels winding her waist to #JohnVuliGate leaves the net in chaos! 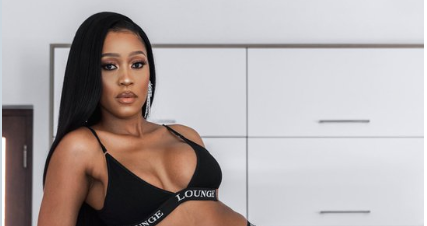 A video of Kings Of Joburg actress Buhle Samuels winding her waist and slow-twerking to the popular John Vuli Gate song landed her on the Twitter trends list on Thursday, as tweeps gathered to admire her small waist and smooth moves.

The video, which was taken from Buhle's Instagram Stories, shows the actress dressed in a body-hugging pastel print dress and baby pink high heels.

Sporting a pixie cut hair-do, Buhle could be seen dancing to John Vuli Gate, adding her contribution to the viral #JohnVuliGateChallenge that has seen the likes of Sbahle Mpisane and several others participate.

The video made its way to Twitter, where tweeps were in awe over Buhle's body and moves. Here's the video of Buhle dancing below:

However, Buhle wasn't trending only because of her hot body and smooth moves.

Tweeps also took the opportunity to comment on her acting skills, particularly as one of the lead roles on the Ferguson Films' Netflix project Kings Of Joburg.

Buhle plays the character of Angela Masire, the wife of the main kingpin Simon Masire (played by Shona Ferguson) and essentially heiress of the empire.

While many applauded her convincing portrayal of the spoilt housewife, others poked a few holes in the storytelling as tweeps couldn't believe the Fergusons had the “audacity” to expect them to believe that Angela had a 24-year-old son in the series.

At the end of the day, the conversation on the TL did a 360 and found itself right at the beginning of why Buhle landed on the trends list in the first place, her hot body!

There were tweeps willing to risk it all for the actress, while others want to be her.

Here are some of the reactions to her video below:

There’s only one lucky human being in the whole universe and that’s @BuhleSamuels_ partner 😩😩😩 pic.twitter.com/uagCUUyI5v

Buhle Samuels is thicker than the debt between Soweto and Eskom pic.twitter.com/Wt8Efp7RFw

Why all girls can't look like Buhle Samuels🔥 pic.twitter.com/M7NoaM6rwO

Bona, nna i'd risk it all for Buhle Samuels pic.twitter.com/GEnB22TfqX

Me after seeing the Buhle Samuels video - pic.twitter.com/XMwkjcrUgS

"I'd give up everything for buhle samuels "😭 says your boyfriend 🙌 mojolo pic.twitter.com/B5POmrbEve

Mzansi had mixed feelings about the upcoming project... something about recycling actors and storylines.
TshisaLIVE
1 year ago

Actress Buhle Samuels has criticised the government over its coronavirus response: "It hurts me to see people lined up at the post office for their ...
TshisaLIVE
1 year ago

"I hope not having alcohol has made us better people, cut dependencies where they were, perhaps giving us a chance to deal with past issues."
TshisaLIVE
2 years ago