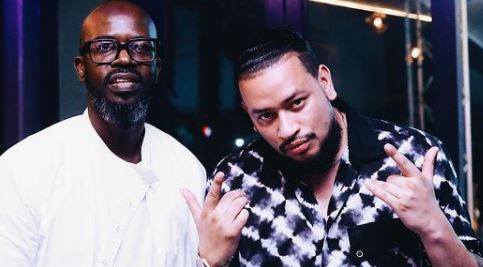 Renowned DJ Black Coffee is showing some love to AKA at his restaurant launch.
Image: AKA/ Instagram

DJ Black Coffee has truly squashed the beef he had with AKA by showing the rapper some support at the launch of his restaurant/nightclub, Cuba BLK lounge, over the weekend.

Last week, the rapper left his Megacy in awe after he announced that he has acquired part ownership of a restaurant situated inside Moses Mabhida Stadium complex, Durban.

After their long-standing feud that nearly shut down the internet two years ago, the pair seem to have buried the hatchet and are supporting one another's achievements.

To show how friendly they are with each other, the man of the moment, AKA, took to social media and shared snaps of scenes from his launch as well as a cool snap with the internationally acclaimed DJ who was also in attendance.

With a caption, “Club Banger”, AKA's fans and followers took to his mentions and expressed how happy they were to see no “beef” between them.

Speaking to TshisaLIVE at the YFM LYFE 2019 concert in Pretoria, AKA revealed he was different to who he was a few years ago and praised Black Coffee for his impact on SA music.

As he was included on Black Coffee's Music is King concert line-up in September last year, AKA expressed how impressed he was by Black Coffee's compliment and joked that he was one of the best live acts in the world.

AKA also touched on his relationship with Black Coffee and said he was a different person to the one who got into fiery exchanges with the DJ in the past.

“With me and Black Coffee there has always been like this ... I don't know what you want to call it ... I think it is growth. I am a different person now than I was then. Back in the days.”

The Fela in Versace hitmaker said he was humbled to work with the DJ.

“It is humbling for him to pull me up and share some of his fire. I have my own little fire burning over here. For him to take some of the wood from his fire and put it on my fire is pretty cool.”

The pair have had their fair share of run-ins over the years.

Speaking to Phat Joe on East Coast Radio in 2017, Black Coffee explained that the feud started after he made an appearance at the annual Channel O Music Awards and AKA tweeted, “Give Black Coffee a hand”.

The DJ was touched and reached out to the rapper, who said his tweet had been taken out of context.

But the peace didn't last long.

“Two weeks later he [AKA] did a song, where he mentioned that he is so dope that even Black Coffee claps for him,” Black Coffee said.

This led to some spicy exchanges on social media, before it all came to a head when Black Coffee slapped one of AKA's team members in September 2016.

Here are five things AKA regrets

Here are the list of things AKA regrets.
TshisaLIVE
10 months ago

Cassper Nyovest celebrates winning Song Of The Year at #SAHHA2020

"If you think I'm gonna win Song of the year at the Hip Hop awards and behave then you got something else coming!"
TshisaLIVE
10 months ago

LEVELS! Kairo gets a new ride from Santa — a whole R6.4k Ford Raptor!

Kairo got a new ride!
TshisaLIVE
10 months ago

'I said I'm sorry and we keep moving on, that's what men do'
TshisaLIVE
10 months ago