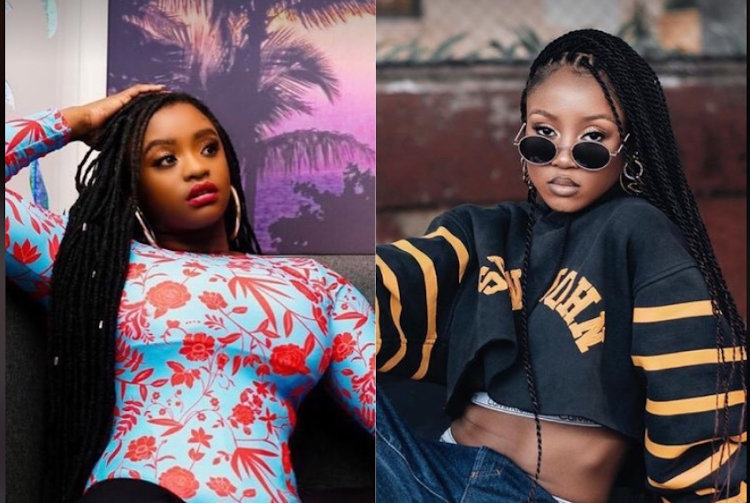 The Twitter streets were left in a chaotic mess on Thursday thanks to a “new” celebrity beef alert, courtesy of actress-cum-singer Samkelo “Samu” Ndlovu and TV presenter-cum-rapper Nomuzi “Moozlie” Mabena. This after Samu posted an hour-long video dragging Moozlie for filth, for allegedly throwing a drink at her.

Samkelo took to Instagram to vent her frustrations and called Nomuzi out, also accusing her of being jealous and a “coward”. The actress explained that she and Nomuzi have been beefin' for a while, however their beef reached its peak in the wee hours of Thursday after her promo performance at Altitude Beach on Wednesday night.

Moozlie allegedly gave Samu the attitude when she asked her to move so she could talk to the people behind her. Things apparently went downhill from that point on.

“Today I was not having it, I was not going to sit there and have her stank face me when I just came offstage and people loved my song and have this b*tch ruin my night, so I asked her why are you looking at me like this? and guess what happened, she had five people surrounding her and they were trying to stop her from wildin' out,” she said in a live video on IG.

Samu claimed that Nomuzi allegedly threw a drink at her and she allegedly had a knife with her. You can watch the full video below (caution: she uses strong language).

Samu didn't give the origin of their beef, however she made it clear that it had nothing to do with the fact that they had both dated actor Thomas Gumede in the past.

“I know you guys will say, oh, Thomas Gumede. I wish you guys knew that I respect Thomas and he is a good friend of mine. I introduced them, I was actually cool with their relationship and I had moved on and I was living my dream of becoming an actress and I never stuck on a man,” Samu said.

The whole time Samu and Moozlie topped the Twitter trends list, Nomuzi literally blue-ticked the whole thing, choosing instead to focus on promoting her album that dropped on Friday.

However, sis didn't sleep on the free promo ...

“Hey man ... #SpiritOfAnOG drops at midnight and that’s that on that. Please just mention that in the story and also please use my new pictures. That’s all I ask,” she said on Twitter.

Please just mention that in the story and also please use my new pictures. That’s all I ask🙏🏾

Meanwhile, the Twitter streets are convinced that it's no coincidence that both Samu and Moozlie are dropping new songs this month and their apparent “long-standing” beef just got lit now.

Twitter was divided into four main camps over the whole thing:

Here are some of the reactions from tweeps in the various camps.

Whether Nomuzi album dropping her album tomorrow or next year, we won’t be streaming same goes for Samkelo’s single.

For the drama we’ll be tuned in😌 pic.twitter.com/fiMKPva0cL

So Samkelo one shape ye WWE wrestler. Is trying to get clout for her music. By talking s*** and body shaming Nomuzi Moozlie Mabena.
Seweird kengok pic.twitter.com/vzwS9jS46T

Promo or no promo, it's their job as entertainers to entertain us, so allow us to enjoy the show in peace bru. Kthiwa unxiba size 12-13 years, Nomuzi has 24 hours to respond.😂😂😂😂😂

Imagine being told that you have a 12-13 ass.
Samkelo doesn't feel Nomuzi Moozlie shame... There's no clap back from this. 😭😂 pic.twitter.com/ytPlLXr5np

When Last did we have the kind of content Samkelo & Nomuzi are giving us today on Twitter. 😂 pic.twitter.com/UeesB8B3kU

Nah Nomuzi needs to drop a diss track on Samkelo. She needs to tap into her inner composure. pic.twitter.com/Z8LyWuZryC

Anything between Nomuzi and Samkelo cant be trusted, for all we know they might be planning something together. pic.twitter.com/qIWRlMm1HZ

Mzansi reacts to 'Rhythm City' being canned after 13 years

"I have worked with Rhythm City since 2011. This is heartbreaking. The family that brought you so much heart and soul and truth now coming to an ...
TshisaLIVE
1 year ago

"Every state-owned company is the pits"
TshisaLIVE
1 year ago

Maybe even Trevor and Zozi should come home and help the other kids...
TshisaLIVE
1 year ago

Samkelo Ndlovu on her Rhythm City exit: I tried to leave a year ago