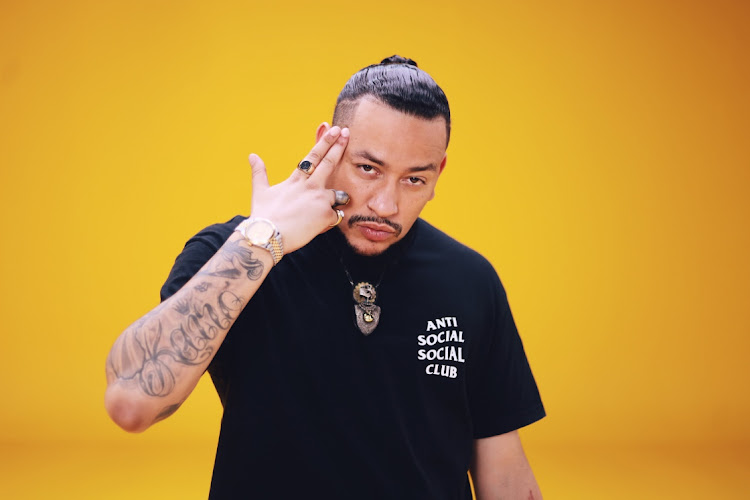 AKA had to deal with an unhappy "service provider" on the TL.
Image: SUPPLIED

Rapper and new club Cuba Lounge BLK part-owner AKA had to deal with business woes in full view of the public when a service provider called him out for allegedly not paying for his services.

The rapper had to post receipts and invoices on the TL when a videographer going by the name @Supermandla tagged him and demanded payment for his work.

The guy claimed AKA had used a video he shot and put together to advertise his club, but when it was time to pay, AKA allegedly delegated the responsibility. That's when the guy took to AKA's TL to ask for his money.

AKA took it as an attack on his brand as a public figure and explained he wasn't going to pay him because he wasn't the one who hired him. AKA implied that the person who had hired the videographer “drank” the money meant pay the people he hired.

“Cuba Lounge BLK and AKA have used my work to advertise they beautiful venue but the work hasn’t been paid for. 2020 such is still happening #PayForTheWorkiDid” the guy claimed.

To which AKA replied: “The problem is that the person who was paid to pay you for your work came to the club and racked up a 19k bill. Good luck with that.”

The problem is that the person who was paid to pay you for your work came to the club and racked up a 19k bill. Good luck with that. 💜 https://t.co/st64PjMhvw

Here is the video for which @Supermandla is demanding payment:

This is the work my g, peep full video on @akaworldwide insta such, same ish they don’t want to pay for pic.twitter.com/9qOZ79wlaj

On his own TL, the videographer insisted he had been wronged and expected AKA, as co-owner of the place, to help him get his money.

He told his friends that was the reason he tagged the rapper, so AKA could help him get the money owed to him.

Seeing AKA post receipts and invoices on the TL, the videographer posted screenshots of conversations between him and the man who hired him to do the job at AKA's establishment.

AKA reiterated that the payment in question was never going to come from him, and reprimanded @Supermandla for dragging him into his mess and essentially tarnishing his reputation.

Here are the rest of the tweets from their interaction:

Here is the bill of the person who the club hired & who is supposed to pay you my guy. I did not want to do this but here you are talking smack to the wrong person. He drank your money. Sorry. 💜 https://t.co/st64PjMhvw pic.twitter.com/ua3mGnGzqF

Chief. I’m sorry you didn’t get paid ...Riders don’t come with bills, as they are not BILLED, they are free. Please take it up with the guy who is supposed to pay you. Don’t attack me publicly if you are not prepared for a PUBLIC response. https://t.co/SlqnT5oa4e

AKA announced his part-ownership of the posh Durban club last week.

The rapper announced he is now part-owner of the club located in the Moses Mabhida Stadium Complex, Durban.

Supa Mega  took to Twitter to give his followers a glimpse of the place by posting visuals and the video in question.

Answering questions from some fans who said he was rude in his dealings with @Supermandla, AKA said he was just “protecting” his reputation.

Shit happens sometimes. *shrug* but when it comes to your reputation you gotta protect yourself. 🤷‍♂️💜

"I am now part OWNER of my very own spot, Cuba Lounge BLK.. take a look... #AKAgoesBananas."
TshisaLIVE
1 year ago

Shoutout to AKA and Black Coffee for squashing their beef!
TshisaLIVE
1 year ago

AKA says he wants to get his money right before he hits the ring with Cassper ...
TshisaLIVE
1 year ago