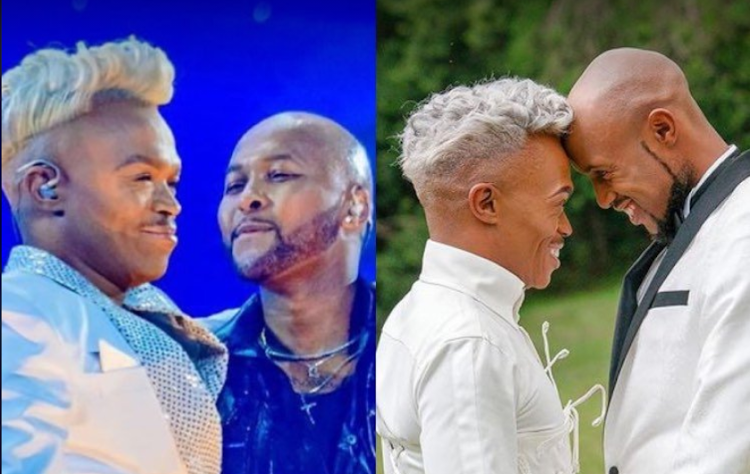 Mzansi “IT” couple Somizi Mhlongo-Motaung and husband Mohale and Somizi's bestie Vusi Nova landed on the Twitter trends list on Christmas eve as tweeps compared the gifts Somizi received from the pair and started coming up with creative assumptions about the Mhlongo-Motaungs' marital status.

Both Mohale and Vusi brought Somizi stunning bouquets of flowers, cakes and balloons for his birthday.

Mohale also added a shopping bag from LV to his pressies, which was fitting because the cake he had made for Somizi had names of all the luxury brands Somizi loves, such as LV, Bentley and Gucci.

Meanwhile, Vusi opted for a simple cream white and gold cake with roses and gold details.

Twitter also went as far as comparing the balloons both men brought Somizi.

The red ones are from Vusi. The attention they are getting 😂🙃.#somizi pic.twitter.com/qb1xa8FI8t

The comparison of Somizi's birthday gifts from Mohale and Vusi comes after weeks of tweeps speculating that Vusi and Somizi are more than friends and that there is trouble in paradise between Somizi and Mohale.

Somizi has shut down the rumour mill about his relationship status with Vusi, making it clear that Vusi is one of his best friends and earlier this year he laughed off the “rocky marriage” reports from the tabloids.

However, that didn't stop tweeps from speculating — based on the differences of the gifts — that Somizi's marriage is indeed in trouble and whether oblivious or not, Vusi had something to do with it. They also drew conclusions on the “personality traits” of both Mohale and Vusi from the gifts they saw on SomG's socials.

Here are some of the reactions from the peanut gallery on Twitter.

I feel like there is nothing wrong between Somizi & Mohale this all acting is to hype the couple's relationship since Vusi was seen as 3rd person.

The more Somizi is on the news & trending the more relevant he is which brings him more gigs... pic.twitter.com/FwFTv34VFb

This is the cake that Vusi gave to Somizi and from your cake we can easily tell what you saw in Somizi and what Vusi See's in Somizi, you need to Heal and find another suger Daddy pic.twitter.com/1e4ZxDrwGj

I see nothing wrong to have a BESTIE, when you have problems in your relationship at least you have a shoulder to cry on#mohale pic.twitter.com/MDi7nNoC3C

Mohale must not worry, what happened on the right hand side will happen on the left hand side, so this thing of Vusi and Somizi will end in tears, Good-luck Somizi. pic.twitter.com/POLpl1wd1j

Only in it for the sha sha💵💴💸🔥 pic.twitter.com/DfFAARDdHd

'Stay with your money if it's going to come with abuse, humiliation'
TshisaLIVE
1 year ago

Somizi's first birthday without his mom: I write this with tears but I’m grateful for life

The star received love from Mzansi on his birthday, including from 'hubstar' Mohale!
TshisaLIVE
1 year ago