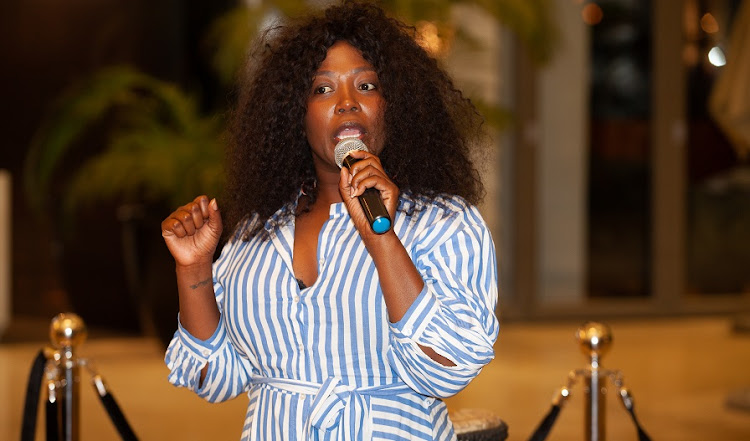 Rami Chuene stepped in to help her neighbour's children who were allegedly subjected to abusive behaviour.
Image: Gallo Images/Papi Morake

Actress Rami Chuene put her plea to fight violence and abuse to action recently, when she called the police on her neighbour, who she alleged spent the whole morning “beating” his kids.

The actress took to Twitter to detail the events that occurred at the weekend. She explained that after listening to the man allegedly beat up his kids, for reasons unknown to her, she got fed up and called the cops.

“You can’t be beating your kids the whole morning. Ke neng bana ba lla! I heard the young boy say: 'I’m sick and tired of you. One day I’m going to wake up and kill you!'”

Ek het die polisie gebel. You can’t be beating your kids the whole morning. Ke neng bana ba lla! I heard the young boy say: I’m sick & tired of you. One day I’m going to wake up and kill you!

Rami implied that this wasn’t the first time the same or a similar incident had occurred, and said she was sick and tired of hearing the children's horrified cries.

She explained that she called the police and, as she waited, she came to the resolution that should the same happen again, she will make notes of things such as the time and how long the “beatings” go on for, so that she can give the information to the authorities.

“The police called to confirm that they’re on their way. The only thing I’m going to say to this man is: every time you beat your kids, I’m calling the police. Going forward, I will write the date, time and the duration of the beatings. Kgale ke mo tlogetše. Let’s fight, shem!”

The Isono actress then gave her followers an update on the matter, saying that the police eventually came. However, by the time they arrived, the alleged abuser and the woman in the household had left the house.

Rami said she suspected that the man may have heard her when she threatened to call the police and “conveniently” stepped out. The actress was glad to report that she wasn't the only neighbour who attested to the existence of abuse in the household when the police arrived. She added that the police said they would follow up on Monday.

“The police just left. Abuti Culprit had conveniently stepped out with wife. I know he heard me when I said I was calling the police. Few neighbours came through to say they know of his beatings. Police left a message/warning for him with our security and they’ll follow-up tomorrow.”

The police just left. Abuti Culprit had conveniently stepped out with wife. I know he heard me when I said I was calling the police. Few neighbors came through to say they know of his beatings. Police left a message/warning for him with our security & they’ll follow-up tomorrow

A few tweeps thanked her for her bravery in calling the cops. Here are some comments they left for her:

Thank you so much for doing this.

I'm actually a bit teary thinking about our own abusive household and how I was always angry at the neighbors who could hear the screaming, shouting, and boxing in our home and did nothing. Even when we were dragged outside by him.

You did well🤞 bless your heart🌺

Rami Chuene thankful for 'small mercy' of virtual funerals: It brings some comfort

LISTEN | Rami Chuene: I have always been vocal about people who don’t treat artists properly

“I think I am a force. No-one would forget me, even if they tried.”
TshisaLIVE
1 year ago

Netflix's 'How to Ruin Christmas: The Wedding' gets Mzansi's stamp of approval!

"#HowToRuinChristmasTheWedding is the best SA original so far. I expect nothing less from now on," one tweep said.
TshisaLIVE
1 year ago