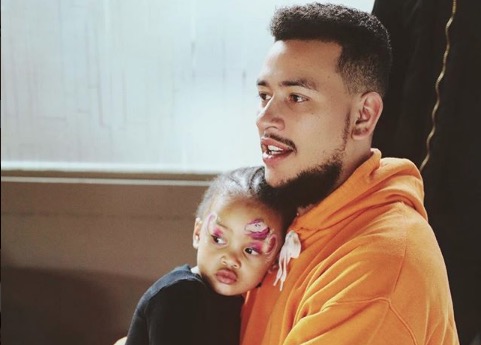 AKA shared his daughter Kairo's first day of 'big school'.
Image: Via Instagram

Just yesterday Mzansi was flooding DJ Zinhle and AKA with congratulatory messages when their baby girl Kairo Forbes arrived. Today, on what feels like two days later, their daughter is ready to tackle “big school”. Isn’t it crazy how time flies?

Fans of the cute celebrity bundle of joy celebrated with proud dad AKA when he shared a picture of Kairo in her “big school” uniform on what was her first day.

Kairo looked super cute as always with a big smile on her face. The five-year-old is out of creche and into preschool, and her rapper daddy could not be more proud.

Check out the snap below that AKA shared, accompanied by love emojis.

Even though it feels like time went by super fast, fans of the couple have been lucky as Kairo has basically grown up before our eyes. From her infant cuteness to her toddler days, Mzansi has watched the little girl show off her stellar personality and absolute cuteness for ages.

We’ve watched her milestones and even saw some of her firsts, like the first time we knew she was a star when we watched her fake DJ moves on her mother’s equipment and her uber adorable videos her Glammy uploads on Instagram.

Heck! We were even there to see the girl get a cute little car from Santa for Christmas.

Fans of young Kairo were left green with envy in 2020 when Santa — probably in the form of either AKA, DJ Zinhle, Glammy or a sponsor — gifted the five-year-old with a new ride for the festive season.

Kairo, who is one of Mzansi’s most popular child celebrities, was super excited when her car, a Ford Raptor, was delivered to her house.

Kairo squealed “it's my car!” in the most adorable high-pitched voice.

The cute two-seater  convertible white Ford, with an exterior design resembling the real  one, costs R6,399 on Takealot. Kairo’s came with comprehensive insurance, a protective cover for rain, a charger and a spare key which was entrusted to Glammy.

LEVELS! Kairo gets a new ride from Santa — a whole R6.4k Ford Raptor!

Kairo got a new ride!
TshisaLIVE
1 year ago

5 celeb children's birthday parties that made us wanna be a child again!

These star children got us in that nostalgic mood. Oh to be a child again!
TshisaLIVE
1 year ago

AKA says as a 'girl dad' he's a Peppa pig super fan!

Raising a little girl has AKA reliving childhood!
TshisaLIVE
1 year ago

AKA & Kairo's pool hangout left tweeps in their #summergoals feels!

AKA is spreading that father-daughter love this summer!
TshisaLIVE
1 year ago