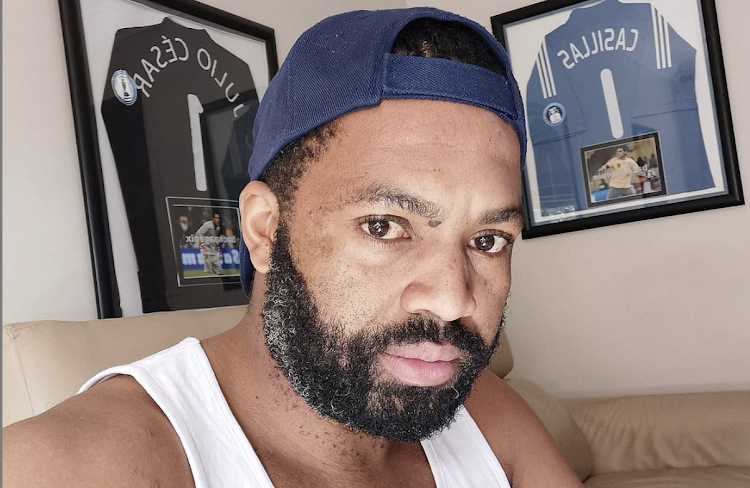 The football star is fed up with trolls who criticise his looks!
Image: Instagram/Khune

Footballer Itumeleng Khune has responded to the hate that he's received for his looks and appearance.

The Kaizer Chiefs and Bafana Bafana goalkeeper often has to fend off trolls.

The soccer star has been criticised for “looking too old” for his age, 33. In the past, the internet has also been convinced the soccer star was lying about being in his thirties and was convinced he was much older than that.

This week, Itumeleng took to Twitter with mirror snaps of himself featuring a speaker and Kaizer Chiefs towel. He asked fans for some advice on what hairdo he should go for next.

Confused by the speaker and his pose, fans were loling in the replies. However, his age was brought into question again, and it seems like some tweeps just can't let it go.

How old are you like seriously bruh, my grandfather looks way more younger than you😳 pic.twitter.com/lculflm5ZZ

The star caught wind of the comments and took to the TL with his frustrations. He addressed his followers, asking why it was so difficult for them to accept that he has aged the way he has.

“People age differently, what is so hard to understand?," he wrote.

Besides his age, the internet has also come for the star's fashion sense. In 2019, the goalkeeping ace posted a photo of himself with a caption encouraging individuality. But fans were far from focused on his motivational words. Twitter dragged Itumeleng for his denim on denim look, saying the goalie's outfit was dribbling him.

I still don’t understand how people are to afraid to see each other WIN!? There is so much room in the industry for your uniqueness! Don’t let people try to dim your light because it shines too bright for their eyes to see!! #Fact 😉 #MondayMotivation pic.twitter.com/X6b5M0i3UA

Khune & his wifey celebrate their anniversary: 'Three years of loving each other, forever to go!'

Itumeleng Khune and his wife Sphelele have been doing this love thing for three years!
TshisaLIVE
1 year ago

Khune’s bae Sphelele: They said we wouldn’t last 6 months but look at us now

Sphelele Makhunga has had the last laugh
TshisaLIVE
2 years ago