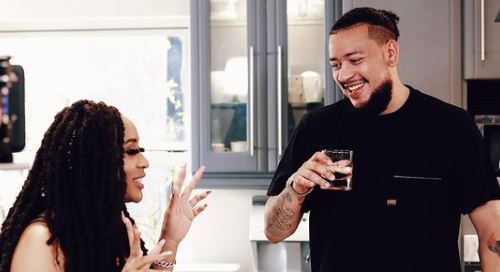 During her guest appearance on the season finale of AKA’s Braai Show on SABC 1,  Nadia Nakai revealed her mentor Cassper Nyovest doesn't have an issue with her working with his arch-enemy.

While breaking bread at the Supa Mega's home, Nadia and AKA spoke about two topics Mzansi most certainly wanted to know about.

AKA's Bryanston home served as the backdrop while meat sizzled on the braai.

AKA asked Nadia whether she was allowed to work with him, considering her record label boss and him don't see eye to eye.

Nadia replied, "Of course, what do you mean?", alluding that Cassper and AKA's beef was none of her business.

While she felt her mentor's long-standing beef with AKA had nothing to do with her, Nadia touched on another topic she feels SA isn't doing enough about.

The More Drugs hitmaker spoke out about why she feels other female emcees do not give her the flowers she deserves.

“I feel like every time people are supposed to give me my roses, they always find a reason not to.”

Nadia told AKA she felt as though the women featured on the Baddest remix were being catty towards her so she could not be happy for them or congratulate them.

“I couldn’t genuinely be happy for the girls because that day they were being catty towards me.”

It looks like Nadia has had a change of heart about working with AKA.

Last May, she revealed why she doesn't think a collaboration with AKA would yield good results for her or her career, and said it has nothing to do with whether Cassper would approve.

She said this during an Instagram Live interview with rapper Da L.E.S.

The Yass Bi*ch hitmaker explained her decision to skip on a collaboration with the Supa Mega - should the chance ever arise - had to do more with knowing her fans and understanding herself as an artist.

She also made it clear  there were no bad vibes between her and AKA.

Step aside blondes, celebrity redheads have been having far more fun. Follow these tips to steal their look.
Lifestyle
1 year ago

Fans are convinced that former US president Barack Obama will definitely listen to the whole album this time!
TshisaLIVE
1 year ago

Nadia thinks men need to up their game!
TshisaLIVE
1 year ago