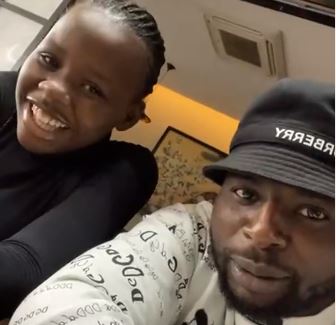 DJ Maphorisa recently left social media users in their warm feels when he showed his soft “I'm a father” side in a cute moment with his daughter Lesedi.

While he is known for blazing up the floors with his hits, Maphorisa surprised many when they got to see how “mushy” he is when he is around his precious 12-year-old.

What was initially an IG Live, now saved on his Instagram profile as a permanent video, saw Phori's fans and followers fall in love with the adorable interaction between father and daughter.

To celebrate Lesedi's birthday, Maphorisa can be seen asking his followers to wish his little one a Happy Birthday while they were out enjoying lunch at a posh restaurant.

Lesedi giggled her way through the better half of the video while she was shy to greet the hundreds of followers on her dad's Live.

“Say hi, and tell them you're spending some time with your dad. Don't laugh at me,” Maphorisa told his daughter in the video.

Maphorisa kept referring to the word “actor”, so Lesedi stepped in to “teach” her father a thing or two about the English language.

“No papa, I am not going to be an actor but an actress. Actor is for you, a male, and actress is for me, a female,” she joked.

Feeling his daughter was dropping some much-needed knowledge Maphorisa replied  “Oh, wow. You learn something new every day. Actor and actress.”

Believing he speaks “street English” as opposed to the posh English his daughter speaks, the Lawd of the decks then asked his daughter to speak the “twang” English for which he pays so much money.

Tresor says he and Bra Hugh Masekela were "good buddies".
TshisaLIVE
7 months ago

Tresor and Maphorisa have known each other for five to six years but only got to work together last year!
TshisaLIVE
7 months ago

DJ Maphorisa hits back at amapiano hate on the TL: 'We started this sh*t'

The 'eMcimbini' hitmaker wasn't here for hate!
TshisaLIVE
7 months ago