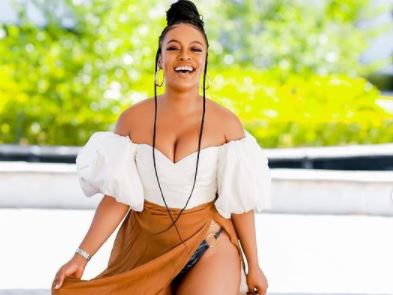 Nomzamo Mbatha speaks about making the most of the opportunities given to her while she was still at school.
Image: Nomzamo Mbatha/ Instagram

SA-born actress Nomzamo Mbatha has lifted the lid on school being an escape in her younger years, and went down memory lane to a time when she made sure she learnt as much as she could from her "average" school.

In a bid to show her younger fans and followers how vital school is, Nomzamo took to Instagram to share a snap of her younger self at primary school, and explained in a post how her "non-Ivy League" kind of school had teachers who showed up for her when it came to her education.

"School was always my escape for many reasons I’ll share some other day, and though I may not have gone to private schools or what may be considered as ‘Ivy League’, I had teachers who showed up for me and a community that protected me.

"I made the most of the opportunities given to me."

She revealed that with her mother being a teacher, she had always been strategic when it came to the skills she acquired as an teacher for children from disadvantaged backgrounds.

"My mommy is a teacher and she has always been strategic in choosing to take her skills to underprivileged schools and building the learning environment. She is so passionate to the point that even when she’s home she will still be in teacher mode."

While she revealed how she grabbed many things given to her with both hands, Nomzamo also took the chance to let her followers know about the initiative her foundation and Hollywood Bets have in store for students in SA.

"Hollywood Bets has R500 000 they are giving to schools nationwide in aid of stationery, uniforms and other essentials."

Nomzamo said she nominated her mother's school to receive funding and aid from Hollywood Bets.

"Lol. So, Hollywood Bets I nominate her school to receive funding and aid, in whichever capacity you may be able to assist. Charity starts at home!"

Last month, the actress revealed her foundation has teamed up with Hollywood Bets to help young people pay their school fees and provide them with school-related items.

Taking to Twitter, Nomzamo shared a video in which she revealed they would give away R1m and gifts school jerseys and shoes to primary schools in parts of SA.

In the video Nomzamo said: "I'm here to make a very special announcement. At the beginning of the year the Nomzamo Light House foundation announced we are in partnership Hollywood Bets.

"We said we are going to give away R1m worth of bursaries to individuals who have outstanding fees, those who need registration money or whatever the need may be. We have closed the entries and are now embarking on this particular campaign."

The Coming 2 America star said together with Unilever and the CottonOn Foundation they will be gifting primary schools in KwaZulu-Natal, Polokwane, Gauteng and the Western Cape with jerseys, school shoes and goodies from Unilever and CottonOn.

"These packs will be distributed at the selected schools. If you're a teacher or a neighbour or even if you're a local, if you know a school is deserving, send an e-mail to info@nomzamolighthouse.org and tell us about the school and why it deserves to be supported."

If you loved the first film, then you gonna loooovvveee this one!
TshisaLIVE
11 months ago

“We witnessed modern day lynching through the murder of George Floyd. I’ll never forget his voice and plea"
TshisaLIVE
1 year ago