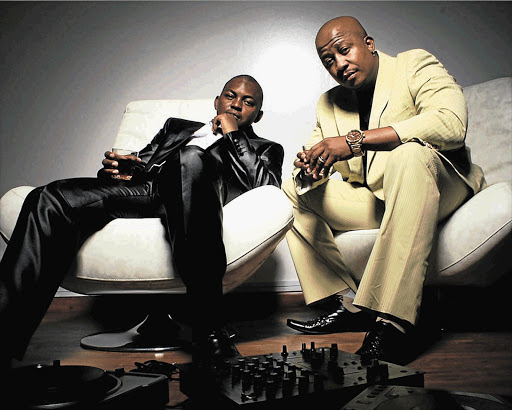 DJs Euphonik and Fresh, once known as F.eU, were fired by Primedia.
Image: Supplied

The internet has been flooded with reactions to Primedia's announcement that the company has parted ways with DJ duo Thato “DJ Fresh” Sikwane and Themba “DJ Euphonik” Nkosi.

Primedia pulled the pair off air more than three weeks ago in the wake of rape allegations levelled against them and now they have been released from their contracts with Primedia Broadcasting.

Primedia said in its statement that the decision to let go of the duo was not a reflection of any view on the veracity of any allegations against either Euphonik or Fresh. It said the decision rather prioritised Primedia Broadcasting's business imperatives.

“We believe that this decision is in the best interest of our company and our various stakeholders,” said Geraint Crwys-Williams, interim Primedia Broadcasting CEO.

Meanwhile, DJ Fresh also issued a statement on Twitter confirming they would be resuming all public engagements.

“After extensive consultation, legal and otherwise, we have concluded that this is in our best interests to resume all of our public engagements. We look forward to our names being cleared. Unfortunately, we can't find common ground with Primedia and have agreed a release from our obligations to the broadcaster, with immediate effect,” read the statement.

The Twitter streets were split in opinions between those who felt the duo shouldn't have “lost” their jobs before a court decision had been made and those who felt Primedia was “right” to cut its losses.

Others couldn't help but bring up a recent episode of MacG's Podcast and Chill, where he predicted that the initial decision to have the DJs pulled off air was the beginning of the end for their careers with the broadcasting company.

MacG said Primedia would probably fire the pair as it disliked being associated with any kind of scandal.

Tweeps took to the TL with their varied reactions.

Here are a few memes:

I remember a while back when some dude asked why that lady was reporting the rape against Euphonik & Dj Fresh on twitter. Someone replied that twitter is more powerful than SAPS. Well, they have now lost that Primedia Bag 🤦‍♂️ ku rweff! pic.twitter.com/C7MQ9JAxna

My heart was really broken over that Msunery issue; I never really got healed from metro fm and now this? If the law really does find you guilty with enough evidence I really hope that you and Euphonik serve your time, if not work on rising again. #Djfresh #FreshOn947 pic.twitter.com/1rVVHTImoT

To all the celebrities who are quiet about Euphonik and DJ Fresh allegations : We see you hey.Your silence is speaking in volumes pic.twitter.com/JKfgPZ3xLm

Rape allegations against the DJs came to light earlier this month after a woman took to Twitter to detail the alleged incident, sparking a widespread debate among South Africans on social media.

In an exclusive interview with TshisaLIVE at the time, the woman, who requested that her name not be published, confirmed she had opened a case of rape at Sunnyside police station on January 13.

She said the alleged rape occurred in 2011 at a chillas (small party) she attended with a friend. At the time, she was a second-year student at the University of Pretoria where she was studying towards a bachelor's degree in commerce.

“First, I want to make it clear I was not some kind of stocko or whatsoever people call girls organised to entertain the DJs. I was simply accompanying a friend to a chillas, and that’s where the whole thing happened,” the woman told TshisaLIVE.

Police spokesperson Capt Mavela Masondo confirmed to TshisaLIVE that a charge had been laid.