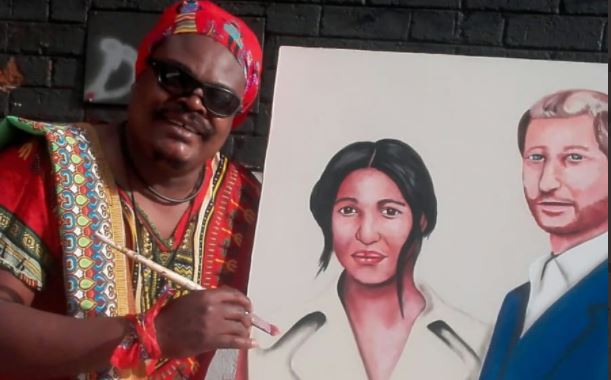 Portrait enthusiast Lebani Sirenje, aka “Rasta”, has got tongues wagging yet again after his painting of Prince Harry and Meghan Markle made its way onto the internet.

Known for botching portraits of famous people, dead or alive, Rasta proved again that his painting skills might need a bit of honing.

In his bid to congratulate Prince Harry and Meghan on the news that they're expecting a second child, Rasta took to Twitter and shared snaps of the portraits he painted in honour of the royals.

I'm back online. Thanks to everyone who showed some love.😀🙏🏽

Congratulations to Meghan Duchess and Prince Harry on the expected 2nd born. 👶 pic.twitter.com/mpp20q1ZHB

While Rasta thought he nailed the portrait of the royal couple, social media users came at him for yet another botched job.

Rasta my guy i think lets stick to dead people atleast they don't have to see this pic.twitter.com/sCpM8AeTI1

🤣🤣🤣🤣🤣🤣 Your bravery is beyond comprehension Rasta.

That's actually why I like his work, his unwavering confidence
Thats commendable in this age

The way you transformed that dress into a full winter jacket🤣🤣🤣🤣🤣🤣🤣🤣 pic.twitter.com/XP8pbgSPKt

Please stick to painting our SA ancestors, not the Royals from other countries, you're embarrassing us😂

In her honour, Rasta took the opportunity to admire the musician with his art by dedicating two paintings to her.

He took to Twitter and shared the two portraits with a caption that read, “Laying Sibongile to rest at Market Theatre”. But the artworks were not welcomed by social media users, who urged him to put down his brushes.

Speaking to TshisaLIVE last year about the backlash his paintings often get, Rasta said people were too quick to judge his works of art.

“People can't just wake up and say I must stop painting, that would kill me ... Rather they must say, go change this or learn this and I'll improve.”

Rasta is notorious for botching portraits of public figures. Critics are ready and waiting to poke fun at his latest painting, of Zuma and Malema.
TshisaLIVE
9 months ago

Rasta strikes again as the internet gives a thumbs down to his portraits of the late beloved singer.
TshisaLIVE
9 months ago

Meghan, Duchess of Sussex, has a royal bun in the oven.
Lifestyle
9 months ago