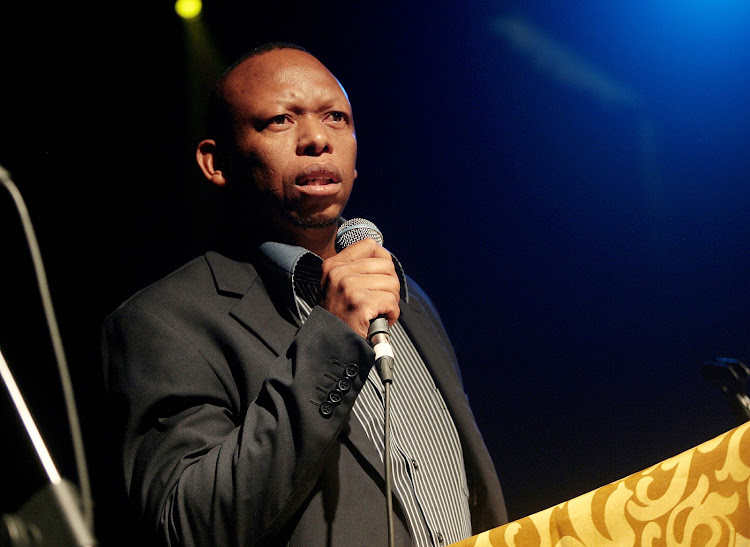 Eugene Mthethwa has chained himself at the Samro building to demand his royalties payment.
Image: Gallo Images / Sowetan/ Veli Nhlapo

The Southern African Music Rights Organisation (Samro) has condemned action by Samro and Trompies member Eugene Mthethwa, who has chained himself to a table at their premises.

This after a video of Eugene staging a protest regarding money he believes Samro owes him went viral.

In the video, Eugene and singer and EFF member Ringo Madlingozi can be seen sitting at a table inside the Samro building as they demand their grievances be met.

“As you can see Eugene has to make a stand, not for himself but for the rest of us as artists. We're here because Samro has been lying. They are not accounting to anyone so here we are.

“They know a lot of membership is black and people who are not privy to those rights, so they are capitalising on that,” Ringo said.

Chained to a table, Eugene said: “We are here. They will see how they remove me. They have to answer the questions I've raised. The white CEO Mark Rosin, somebody who was exploiting artists, is the same person they've brought to come and get his pension funds from Samro.

“When our own members don't have pension funds, don't have anything.”

Eugene said he had been a member of Samro for 30 years but his pension funds amounted to less than R300,000.

“ That's nonsense. What they have been doing is taking music that is popular and removing it from being documented. That is robbery. I'm told I should be prevented from getting into the building, a building  built with our money!”

[TODAY]: Eugene Mthethwa has taken a firm revolutionary stance of making a sit-in at SAMRO in need of answers to questions that he has been asking without answers.

He's chained himself as a symbol of how he feels SAMRO is treating artists.@ndiyagodola has joined in solidarity. pic.twitter.com/NjmSvQb43n

While the initial video was shared hours ago, a tweep shared another video that showed Ringo and Eugene were still at the Samro building starting day two of their protest.

Eugene Mthethwa and @ndiyagodola are STILL at SAMRO. We’re going on day two for a simple simple matter! @the_dti do something! pic.twitter.com/WY4Xb8ezoM

In a statement provided to TshisaLIVE, the Samro CEO confirmed Eugene had raised a complaint regarding the calculation of his royalties.

“Samro has tried on many occasions, through many of its managers and board members, to amicably address his concerns.”

While Mark described the protest action as regrettable, he said: “It is impossible to deal with the issues Mr Mthethwa has raised over the years  when there is no willingness to resolve the matter other than his way. We have processes that apply to all members and in our ongoing quest for transparency, we will not circumvent these processes for an individual.

“The difficulty Mr Mthethwa has is that he fraudulently gained access to Samro funds, which even led to Samro expelling him as a member. In good faith, the present board reinstated his membership. However, we now sit with an outstanding amount due to us by Mr Mthethwa which his royalty earnings get off-set against the balance. It is not a desirable situation for either party but we have had to deal with the matter through the courts.”

Mark said they were “disappointed” and “alarmed” to see a member behaving in this manner, especially when his conduct is not supported by facts.

“Contrary to Mr Mthethwa’s claims, Samro pays royalties on a regular basis and over the last two days has paid more than R60m to local composers and publishers, a payment  widely welcomed."

Thandiswa asked all the right questions
TshisaLIVE
2 years ago

"Without prayer, God and his miracles, I didn't survive this year. I'm back home in Mafikeng, my cars are taken, my house is auctioned for Sars ...
TshisaLIVE
1 year ago

Halala! ProVerb is elected onto Samro board

ProVerb has added Samro board member to his belt of achievements.
TshisaLIVE
1 year ago

ProVerb is known for wearing many hats in the entertainment industry and joining the Samro board will add to his portfolio,
TshisaLIVE
1 year ago