“People out there are saying that we are dating but we’re not dating. We have mutual respect for each other and we trust each other a lot," Vusi said. 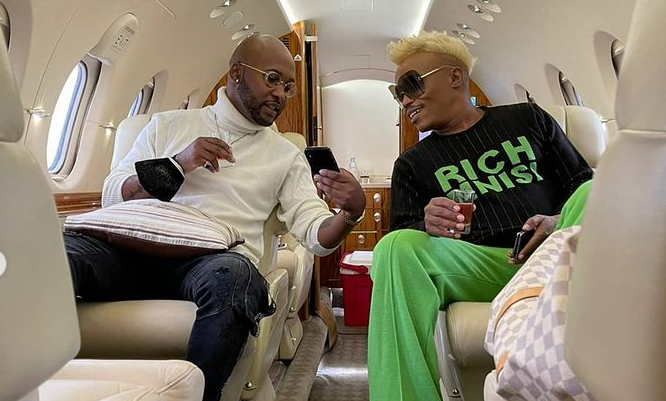 Best friends Vusi Nova and Somizi recently went on holiday together and Vusi has now come out to set the record straight on his relationship with Somizi.
Image: Instagram/Somizi Mhlongo-Motaung

As his friendship with  Somizi Mhlongo-Motaung continues to hog headlines, singer Vusi Nova has come out to set the record straight on their relationship as Somizi's husband Mohale Motaung-Mhlongo continues to trend every time SomNova is seen together.

Ever since rumours around there apparently being 'trouble in paradise' between Somizi and Mohale began to swirl, fans have become "suspicious" of the close relationship Vusi and Somgaga share.

In the latest episode of What’s Your Poison?, a podcast hosted by seasoned broadcaster Jon Savage, Vusi got candid about his life, his struggle with drugs and his relationship with SomG.

“I have known Somizi for 16 years. I met him before I even got into the music industry. He’s so real and supportive,” Vusi explained.

“People out there are saying that we are dating but we’re not dating. We have mutual respect for each other and we trust each other a lot ... With us, it’s realness all the way. It’s been 16 years now and we’re still going strong.”

Watch the full interview below:

Vusi admitted he trusted Somizi with his life and that he treasured their friendship and therefore found it important to nurture it.

True to his words the pair have been spending a lot of time together, going on bestie-vacations. Just recently, the pair chose to give the middle finger to haters, when they  jetted off on a “business and pleasure” bestie vacation in Cape Town.

Everything about the pair's Cape Town weekend away screamed luxury and leisure.

Not only was Somizi rocking his Rich Mnisi and Louis Vuitton, but the pair were super comfortable as they flew in a private jet where they were served bubbles and given the best food.

Meanwhile, fans of Somhale have been concerned about Mohale's feelings as he was "out on his own" during both SomNova vacations.

Whenever the pair is spotted out and about, Mohale lands on the trends list as tweeps can't help but wonder if he doesn't feel left out or worse ... replaced.

Aiy true. Their marriage is over. No more vacations together, no more tagging each other, Somizi is busy with vacations with vusi, mohale is busy buying school shoes. Kore ke rao rao

However, Mohale has blueticked the constant trending and has kept mum on his marriage life with exceptions to interviews he does with Somizi.

In an interview with True Love magazine earlier this month, the couple got real about the online rumours and speculation from Mzansi that they were going through a rocky patch.

The couple said that even though they may have troubles, this was normal for all married couples.

“Mohale and I have never split up, but we have challenges just like any other couple out there. We’re fortunate that we have other homes to retreat to when we choose not to be in the same space, so we either go to our home in the Vaal or Zimbali,” Somizi told the magazine.

Somizi and Vusi's "bestie vacation" defined everything "soft life" is about!
TshisaLIVE
3 months ago

Somizi hates that social media users are too invested in his love life!
TshisaLIVE
4 months ago

Picture timeline: A year of marriage for Somizi and Mohale

The newlyweds have been slaying the TL in 2020.
TshisaLIVE
4 months ago
Next Article