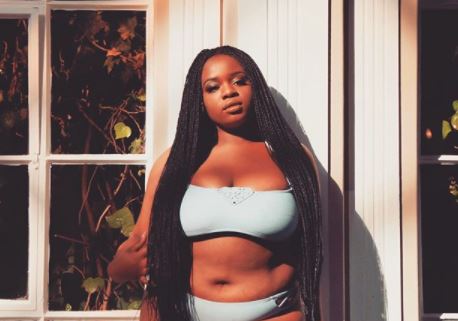 Photographer and model Thickleeyonce has no time for haters and fat shamers.
Image: Via Instagram

Photographer and plus-size model Thickleeyonce has had enough of body shamers on the socials and has decided to put them in their place.

The body-positive activist took a stand against trolls who consistently judge overweight women for what they eat in tweets on Twitter in which she bashed them for being “so evil”.

Her “fat shaming” tweets were sparked by a tweep who told her it was too early for her to be craving pizza. The tweep even suggested the plus-size model hit the gym instead of eating junk food.

Babygirl, how about gym? I mean comeon. Too early for junk. We are thick and all also but should atleast try and promote healthy lifestyles. Not to get skinny but to be healthier!

Feeling the tweep was out of line, Leeyonce simply told herself not to worry whether or not she was healthy.

When people teach, learn! Don't be too pompous now that people are embracing your thickness. Health is very vital sisi. We all need that!1❤

She then told her off, saying her unsolicited advice was not needed.

I love how everyone turns into a doctor when when fat people eat junk food. Go be a teacher else where, not here. *eats my pizza* https://t.co/8s35Z1Xkhw

Leeyonce she she was baffled by people who always turn into “doctors” and have something to say when it comes to what a fat person eats, but have nothing to say when skinny people eat unhealthy food.

I see skinny people tweeting about eating KFC for breakfast , no one will say anything about their health, but let me talk about craving chocolate at 8am, then everyone is a doctor who’s worried about my health. Please. Gtfoh.

Leeyonce said fat shamers didn’t necessarily care about the health of big people but rather wanted to police them about what they can and cannot eat.

You don’t care about fat people’s well-being, you just want to police our bodies and mask your fatphobia as “concern” for our health. Just stop.

Feeling hurt by the amount of hate and negative comments thrown at fat people, Thickleeyonce said she can never get used to how evil people can be on Twitter.

Y’all are so evil. I can never get used to it. Wow.

Thickleeyonce on unsolicited comments about her skin: 'Mind your business, captain obvious'

Lesego Legobane, known among followers as Thickleeyonce, says she has been receiving unsolicited offers to help clear her skin.
TshisaLIVE
1 year ago