Zenande Mfenyana hits back at comments her family has 'conditional love' 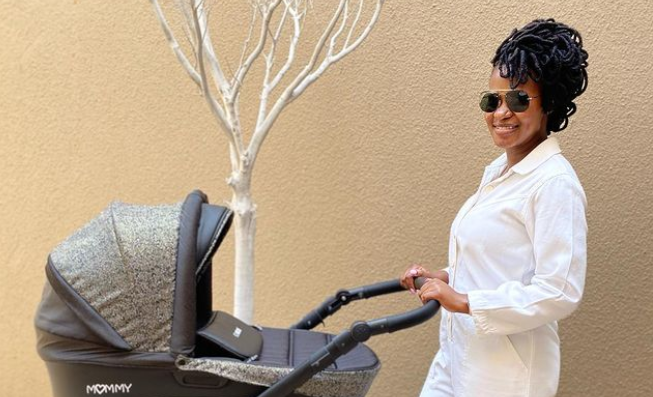 Actress Zenande Mfenyana has set some tweeps straight after they suggested the “obsessive love” her family has for her daughter is “conditional” because she has money.

The actress and new mommy took to Twitter to share the joy she feels every time she counts her blessings and realises that her family adores her baby Ballerina very much.

She said it warmed her heart to see all the love her daughter is surrounded with.

“Seeing how my family adores and loves my daughter warms my heart so much I think they might be slightly obsessed with her,” Zenande said.

However, the actress was left disappointed, offended  and shocked when some tweeps' immediate reaction to her love-filled tweet, was that Zenande's family only love her child because she has money.

Two tweeps, one after the other, said they were of the opinion that the “obsessive” love that Zenande was observing from her family was conditional. They figured the love was only pouring out because she's guaped.

Zenande made sure to correct the tweeps immediately and expressed how shocked she was by their replies.

“My family is not like that bhuti, speak for yourself,” she said to one tweep.

“I'm shocked by this reply,” she said to the other tweep.

My family is not like that bhuti. Speak for yourself

I’m shocked by this reply 👀

“I'm so shocked by some of the replies on my previous tweet. Sies! Cleanse your heart people,” she later tweeted.

I’m so shocked by some of the replies on my previous tweet 🤮 sies! Cleanse your hearts people!

This is not the first time Zenande has interacted with tweeps on her TL about parenting.

While most conversations are insightful, not all of them end well, as different opinions and the way they are presented don't always rub the actress the right way.

Late last year, Zenande labelled a tweep as “entitled” on the TL after the tweep suggested that childless friends ought to do more to help their single parenting friends.

The new mommy had been dishing on all things parenting lately and felt the need to weigh in on the then hot TL topic. This was after a tweet about friendship and parenting went viral and left tweeps debating whether friends should help out their single mother friends when it came to helping raise their children.

The Queen star caught wind and weighed in on the situation, saying the tweet reeked of entitlement.

“This tweet screams entitlement. My friends have their own lives. It’s MY baby, MY responsibility. My friends don’t owe me and my child anything,” wrote Zenande at the time.

‘Why is sex seen as punishable in the church?’ asks Zenande Mfenyana

Zenande said she hoped her questions would be tackled and Twitter came through...
TshisaLIVE
1 year ago

Zenande Mfenyana gets real about her fitness journey: Daily workouts are hard

It's all in the mind. If you win that battle, then you've won the war.
TshisaLIVE
1 year ago

"He inspires me each morning to work harder at my fitness goals," wrote Zenande.
TshisaLIVE
1 year ago

"My friends have their own lives. It’s MY baby, MY responsibility," Zenande hit back.
TshisaLIVE
1 year ago