AKA to Cassper: 'Someone tell Mama Jack to leave me the f**k alone'

AKA and Cassper reignited their beef with a fiery war of words on Twitter ... 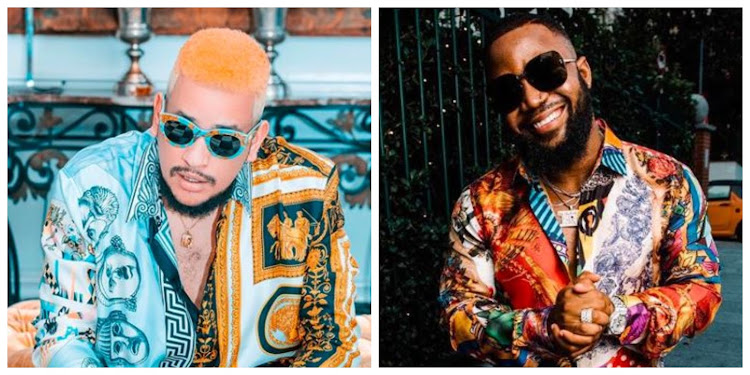 Hip-hop rivals AKA and Cassper Nyovest again got into a heated war of words, re-igniting their six-year-old beef.

Considering the boxing match between the two hasn't seen the light of day, AKA and Cassper still haven't found a way to bury the hatchet.

This has resulted in the duo being "triggered" by every little sub-tweet. All it took this time around was a thread containing memes of SA rappers as women, to push the rappers into yet another twar for the books.

A tweep, who admitted he was simply bored, created a thread filled with Photoshopped snaps of SA rappers such as AKA, Cassper, L-Tido, Yanga Chief, DA LES and many others as women, complete with weaves and make-up.

See exhibit A below:

AKA vs Cassper @akaworldwide vs @casspernyovest

Khanti when is this Beef ending?
😂🙆‍♀️ pic.twitter.com/VV3FzXphJD

AKA caught wind of another tweep asking who looked better as a female between Cass and AKA.

“This is hands down the craziest sh*t I’ve ever seen on Twitter,” AKA said when he saw the Photoshopped snaps.

Then the rapper responded and said he thought he looked hotter than Cass, who he then nicknamed “Mama Jack”, making reference to the Leon Schuster film.

Things pretty much went downhill from there because Cassper then responded, not only to the memes but he took the twar straight back to the failed boxing match.

“The memes are very funny but we are both grown men. Let's leave the memes to the kids & finish what you started by calling me out to a boxing match after swearing at my mother. Back up your words and let's end this long boring beef. It's a great chance to entertainment the fans 2,” Cassper said.

Read the rest of Cassper's thoughts on the matter below:

I know and I don't mind that. It's cringeworthy that I am entertaining him but I just need to close this chapter properly and in the most entertaining fashion.

At some point people are gonna have to back their tweets up. You can't come ouchea talking reckless and then say "it's not that deep fam". Come see me in the ring fam.

The response I want is the contract signed and submitted to the promoter so we can fight. He swore at my parents and said he wanna see me in the ring. Now he wants to run away. We need to get in the ring and get it done. I will never let him forget that he ran. Like a chicken!!! https://t.co/i0aZY4JDsw

To which AKA responded with these tweets and then blue-ticked the continued bickering from Cassper's camp and his Megacy.

“Someone tell Mama Jack to leave me the f**k alone. If someone swore at my mom I would fight the ni*** for free ... and it wouldn't be in no ring either.

“If something was supposed to happen it would have happened by now ... we are bored, we are tired, haai no man Mama Jack stop it now,” he said with crying-laughing emojis.

Someone tell Mama Jack to leave me the fuck alone 🤣🤣🤣🤣

If someone swore at my mom I would fight the nigga for free ... and it wouldn’t be in no ring either. 🥲

C’maaaaaan stop it now. If something was supposed to happen it would have happened by now .... we are bored, we are tired. Hayi no man Mama Jack .... stop it now 🤣🤣🤣🤣

AKA didn't even flinch though...
TshisaLIVE
1 year ago

Cassper 'needed' AKA boxing match to 'motivate' him at the gym

Cassper Nyovest alludes that the idea of the boxing match is what helps him to work out and stay fit!
TshisaLIVE
1 year ago

Cassper and AKA, Mzansi is waiting!
TshisaLIVE
1 year ago