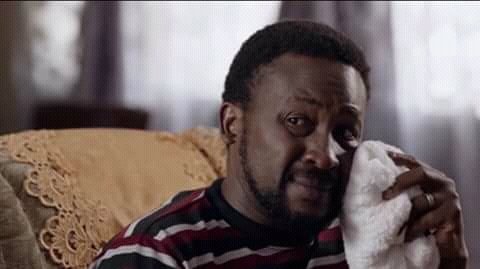 Magongwa is afraid of his wife Celia.
Image: Via Twitter/Skeem Saam

Skeem Saam’s Meneer Magongwa finds himself in the thick of corruption after securing a tender fraudulently but he’s more scared of his wife than the might of the law and fans were left in stitches over the realisation.

Magongwa and his wife Celia have a history of being on the wrong side of the law and have held the “Bonnie and Clyde” title on the soapie for a while. However, after his latest solo corrupt mission, Celia wasn’t impressed with him and has even threatened to go to the police and report her hubby.

Magongwa also broke fans’ hearts when it was revealed the victory they celebrated —  thinking it belongs to Alfios — was actually a lie. It turns out, Alfios was merely Magongwa’s puppet during the presentation for the University of Turf food tender.

Now viewers can’t figure out if Celia is reacting out of jealousy that Magongwa acted without her or if she’s honestly on the straight and narrow road now.

Meanwhile, Magongwa was having a hard time trying to figure out how to get Celia on board. He’s been walking around with his “I’m scared” face and tweeps were enjoying watching him squirm, if not for using Alfios then for deceiving the whole community, both off and on-screen!

Here are some of their reactions below:

Magongwa makes this face each time he is scared or confused #SkeemSaam pic.twitter.com/tsYP5CaHRr

I was rooting for Alfios until I found out what he did with Meneer Magongwa and Nimrod. #SkeemSaam 😢 pic.twitter.com/4qsmvbd5F4

Magongwa is so irritated ka Corruption topic we all know why akere #SkeemSaam 🤣🤣😂😂 pic.twitter.com/9THhVh63Of

Mantuli is always looking for the next scoop!
TshisaLIVE
1 year ago

IN MEMES | 'Skeem Saam' fans are super excited that Alfios won the tender!

Alfios is proving that that everyone can have a slice of the tender pie and tweeps are here for it!
TshisaLIVE
1 year ago