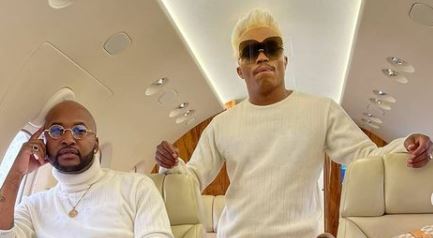 Vusi Nova and his bosom buddy Somizi have more bestications up their sleeves.
Image: Somizi/ Instagram

Fans of Somizi and Vusi Nova (#SomNova) have enjoyed watching the pair on dreamy vacations every other week and Somizi has finally let their fans know it's all part of their plan for 2021.

Somizi and Vusi went on yet another vacation, this time to Swaziland. The bestication also doubled up as a “business and pleasure” long weekend for the hard working best friends.

The Idols SA judge revealed he and Vusi were inspired by 2020 to make the most of life as friends and had made a pact to go on a young vacation every two weeks in 2021. He added that they were doing well in keeping that promise to each other and intended on continuing in that fashion.

“Happiness and living lives between me and him. Memories for life @vusinova1,” he captioned one of the posts from their most recent vacay.

Vusi also took to his Instagram to post a few of the moments shared as the pair make memories together.

It hasn't been all play for the duo as they both have been securing the bag all round. Vusi has been promoting his latest album while Somizi has been solidifying his multiple income streams in the food business and as the Bantu x Somizi shoe ambassador.

The self-taught chef has been serving people African cuisine every Sunday for the past two Sundays at the Cofi Brooklyn restaurant in Pretoria. Next Sunday will be the final leg of the Pretoria tour, after which he will then serve his food to other cities.

Here are some snaps and videos from SomNova's latest vacay:

As always, Somizi's plan to be on a bestication with Vusi or any of his other friends every second week left his fans and trolls wondering where his plan placed Mohale.

Somizi's husband becomes the talk of the town in Somizi's posts every time Somizi is seen with Vusi. However, Mohale has also been busy with his boss moves or spending time with his family and friends sans Somizi.

On the weekend of the most recent bestication, Mohale was spotted enjoying his weekend with his little sister and her friends.

“My lil sis @pulane_is is taking me partying with her mates ... this is gonna be fun!” Mohale shared on his Twitter.

Somizi has really been spoiling his bestie Vusi Nova lately. His latest gift is a beautiful statue for Vusi's swimming pool.
TshisaLIVE
5 months ago

Somizi and Vusi's "bestie vacation" defined everything "soft life" is about!
TshisaLIVE
5 months ago

Somizi hates that social media users are too invested in his love life!
TshisaLIVE
6 months ago