OPINION | Celebs, stop crying foul when you are part of the Covid-19 problem

Musicians have a responsibility to be active in the fight against the spread of Covid-19, not play the blame game 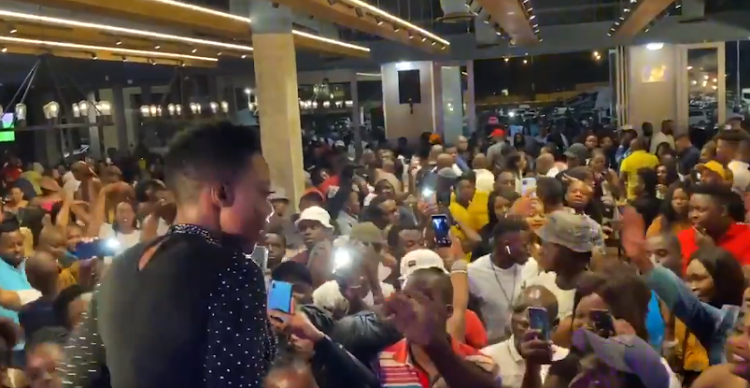 At midnight on Thursday March 26 2020 the country went into strict lockdown to curb the spread of Covid-19, changing our world forever and throwing the entertainment industry into a deep, dark space for several months. So why, a year later, are so many entertainers acting like nothing has changed?

The days after President Cyril Ramaphosa's announcement saw venues shut down, concerts banned and shows cancelled. Musicians who had earned a large part of their living from live performances were in shock.

Like many, they followed the rules during the 21-day lockdown in the hope that it would be enough to return to normal a few weeks later. But as days of lockdown became weeks and months, they naturally grew anxious. They were struggling to make ends meet and let anyone who would listen know.

They took to social media to ask Ramaphosa to lift restrictions so they could feed their families and marched in the streets to be heard.

It was a valiant effort and one that everyone could understand. Even if it felt sometimes like they were in an ivory tower, in this moment they were human and in need of assistance.

But, sadly, as restrictions lifted so did the chance-taking by some artists.

While the video has since been deleted, scenes from the clip left tweeps debating over whether the rapper was irresponsible for posting such a video ...
TshisaLIVE
1 year ago

Suddenly the question making headlines was not when the government would lift its ban on concerts but why people were not wearing masks and social distancing at the small gatherings that were allowed.

From Good Luck and Riky Rick to Zodwa Wabantu and Black Coffee, from Jerusalema hitmaker Nomcebo Zikode to Idols SA star Somizi; one by one artists were being raked over the coals for performing at gigs where people were breaking Covid-19 laws.

It could be argued that they were active witnesses to a crime and seemingly looked the other way.

I'm not saying we need to shut down the industry again. I have seen the devastation that caused last year and how it left many creatives broke and hopeless.

I'm not coming after anyone's bag, I am more worried about what comes after it has been secured again

I am not coming after anyone's bag, I am more worried about what comes after it has been secured again.

The Easter holiday is a busy time for artists, with DJ DBN Gogo booked for at least 17 events, and alcohol will be allowed at many venues, including restaurants, shebeens and bars.

The mix of festivities and alcohol has sometimes been blamed for crowds going AWOL and ignoring Covid-19 safety regulations at venues over the past few months, and it doesn't seem like anything will change this weekend.

Some artists may shift the blame and say that it is the responsibility of the venue to have a “no mask, no entry” policy and ensure that the crowd obeys lockdown rules, but what about the videos and images that flood social media each week of performers standing less than a metre away from these “unruly” crowds?

'Jerusalema' hitmaker Nomcebo Zikode's recent show at a News Cafe in Limpopo has sparked controversy and an investigation by the company after claims ...
TshisaLIVE
1 year ago

If you are not going to refuse to perform for your own safety, then at least don't share a mic and crowd surf like 2021 is just 2019 with more vibes.

Like it or not, musicians are public figures and have a responsibility to be active in the fight against the spread of Covid-19. Every time they blatantly flout the regulations themselves, they are encouraging their fans to do the same.

No amount of shifting the blame is going to change that.

If the Easter holidays bring a spike in Covid-19 cases and live shows are prohibited again, I hope the artists who have taken chances will finally acknowledge that they and their celeb status are not exempt from the new normal.

Cancel your flights and stay home, public figures - travelling for leisure is insensitive.
TshisaLIVE
1 year ago

Riky Rick doesn't see the need to apologise for the viral video.
TshisaLIVE
1 year ago

Here’s how Zodwa is making a comeback to the groove

"At this rate you will catch the virus, you got to take a chill pill," one fan said.
TshisaLIVE
1 year ago

DJ Warras on lockdown: 'It ruined more people's lives than it saved in my opinion'

The DJ shared his grievances on how the lockdown has affected SA one year later.
TshisaLIVE
1 year ago