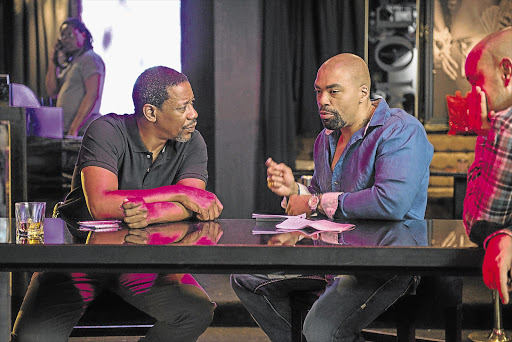 Mzansi has been spoilt for choice with all the new TV shows that are giving older ones a run for their money.

Local producers have again proved they know what Mzansi wants and continue to gift viewers with storylines that keep them glued to their seats every night.

Giving established shows such as Uzalo and  e.tv’s Scandal and Gomora a run for their money, April brought several new shows that are captivating.

SA finally got to watch The Estate, which replaced SABC 3’s Isidingo.

A new series based around the US sitcom Ugly Betty started on SABC 1, giving viewers a refreshingly localised version in uBettina Wethu.

Stepping into the huge shoes left by the much-loved Isibaya, Diep City had viewers hooked in the first 10 minutes and promises to be one to watch as it continues to grab audience attention.

The return of Ferguson Films’ Rockville didn't disappoint viewers, who couldn’t wait to see how life has continued for the loved characters in the thrilling story.

Taking to her Instagram, an emotional Connie Ferguson explained how it felt to return to the small screen as the humble Ausi Mavis and as a producer of the show that launched their company.

“This show makes me so emotional! This is our first born. The show that started it all. The show that launched the Sunday night drama slot on Mzansi Magic. The show that created opportunities for many, including Shona and I as first time producers. As we go into season 5 tonight, I’d just like to take a moment to say thank you,” she said.

Other actors who have found homes in  new characters on the newly launched show include The Estate’s Dineo Langa and uBettina Wethu’s Brighton Mngoma. They also took to their social media to express their gratitude for the opportunitiesand their excitement about the shows.

Actress Nozuko Ncayiyane was left speechless on debut day, only saying how grateful she was for the blessing of playing a lead role on Diep City.

“I wish I had a long, deep caption but I’ve just had a really long talk with my God and I’m left with no words to express how grateful I am for this blessing. I pray Nox heals you as much as she continues to heal me each time we walk the streets of Diepsloot.”

Here are some of the reactions so far:

Black brain has done it again! #DiepCityMzansi is tooo nice! I’m hooked! The acting, the scoring 🎶 the cinematography 🙌🏾🙌🏾🙌🏾

10 minutes in and I'm intrigued 👏👏👏 pic.twitter.com/ppqwzb3sQS

Out of all the characters that @Connie_Ferguson has played, Aus Mavis is by far my most favorite 😍 ke mo rata gore! #RockVille5

@ubettina_wethu character reminds me of myself when it was my first time being in JHB 😂 she is such a funny character though, definitely one of my faves ❤️

As for Dingani 🤣 ay I'm scared shame, maybe next week we will find out he has more girlfriends.#UBettinaWethu

I was skeptical at first, but now I'm sold! I love this show! #UbettinaWethu

'Rockville' brings hope back to TV

ROCKVILLE - the drama mini-series created by Shona and Connie Ferguson has only been on TV a month, and its head writer Phathutshedzo Makwarela, ...
TshisaLIVE
9 years ago