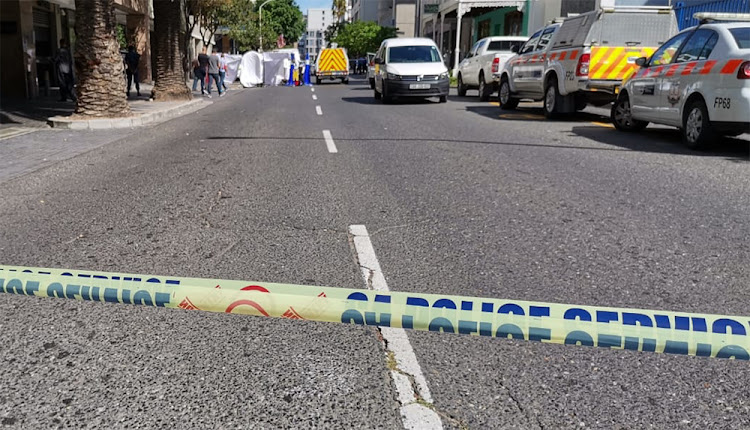 The road outside the Pepperclub Hotel in central Cape Town was closed by police on Sunday morning.
Image: Aron Hyman

Police were on Sunday morning investigating the death of 22-year-old Nelli Tembe, the fiancée of well-known musician AKA, at the five-star Pepperclub Hotel in central Cape Town.

Witnesses at the scene described hearing a scream, followed by a “loud doef” sound, and said they had also heard a man shouting.

A source close to AKA said he was "inconsolable".

"Paramedics on scene have said a female had allegedly jumped from the 10th floor of that building. When paramedics arrived on scene, she had sustained polytraumatic injuries," Netcare 911 spokesperson Shawn Herbst said.

"She was in a critical condition and they started a full life-support resuscitation. Unfortunately her injuries were too severe and she was declared deceased," he added.

Pepperclub Hotel general manager Efi Ella also confirmed that a young woman had fallen from one of the upper floors of the hotel at 7.30am on Sunday.

Pepperclub Hotel general manager Efi Ella said they got a call at 07:30 on Sunday morning about an "incident" involving a 22-year-old female. It is reported that the victim fell from the tenth floor of the Hotel. Pathologists wrapped up the scene at about 13:00. @TimesLIVE pic.twitter.com/RnqVxJCQ2x

"Cape Town Central police are investigating an inquest case after an incident at a hotel this morning at about 7.45am on the corners of Loop and Bloem streets, Cape Town CBD, where the body of a 22-year-old woman was found deceased," the police said in a statement.

Police blocked off the road outside the hotel.