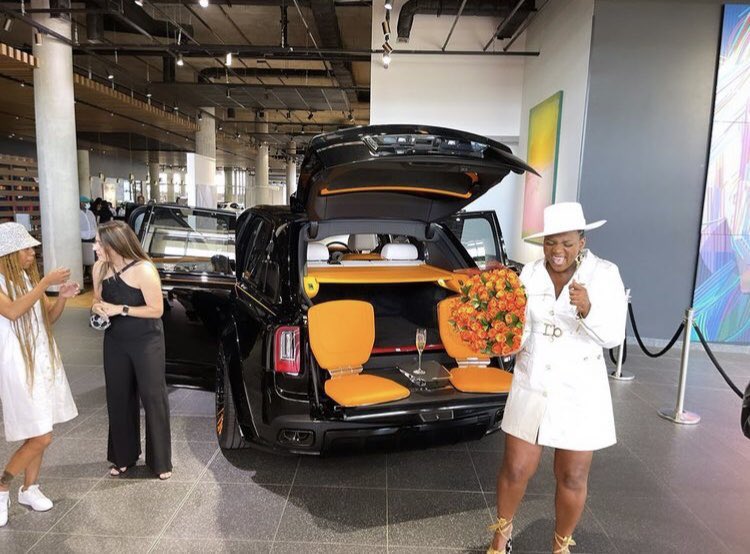 While it is public knowledge that businesswoman and reality TV star Shauwn “MaMkhize” Mkhize is rolling in it, her latest purchase left Mzansi shook when she flaunted her  Rolls-Royce Cullinan worth an estimated R16m.

Shauwn recently celebrated her birthday and after seeing snaps of her fetching the Rolls-Royce from the dealership, fans couldn’t help but stan as they assumed she blessed herself with the ride to celebrate the milestone.

A quick search on the net revealed the stunning beast of a car is priced at a whopping R16m!

Auto Trader reported that according to the 2019 SA Wealth Report, MaMkhize’s particular Rolls-Royce was one of the top 10 most expensive SUVs in SA.

Here are snaps of MaMkhize showing off her latest ride!

Fans of the Kwa MaMkhize reality TV show queen were stunned when snaps of her in the flashy ride flooded social media timelines.

Fans celebrated MaMkhize’s expensive purchase and expressed how much of an inspiration she was to them. Others, however, didn’t have anything pleasant to say about her splurge or how she makes her millions, with some accusing her of corruption.

Here are some of the mixed reactions that caused MaMkhize to trend over the weekend:

maMkhize added a Rolls Royce Cullinan to the fleet pic.twitter.com/yGSal4DyMb

Please leave Mamkhize alone, she's not the only person owing SARS, mind you she's about to settle tax. Why is she not arrested if she's a criminal? Any court case? Let people enjoy their money in peace and don't forget to sanitize your hearts ❤️ pic.twitter.com/6LwDcKgXbg

You can Mamkhize all day, fact is a brand new black badge Rolls Royce Cullinan is parked in her garage! 🤣 pic.twitter.com/igaCvXsmMr

This whole MamKhize thing isn't infuriating us enough guys... It's not. 😑

Being poor and seeing people living soft life will make you think they Did something wrong to live that soft life 😂😂 Bana BA baloi hate Mamkhize pic.twitter.com/1hUVmtc99a

MaMkhize’s success has always been met with mixed reactions from people on social media, especially since she gave Mzansi a front row seat into her life through the reality show.

Recently, after bagging a role on SABC 1’s Uzalo, Shauwn received another backlash.

Speaking to TshisaLIVE, Shauwn previously addressed all the hate she receives.

“I’m like a dark horse. When I enter a place people always question me. I actually like it when people just look at me and count me out. I always like it when people have negative things to say because I always come up and surprise them. That’s my nature. I thrive when I succeed where people least expect me to,” said Shauwn.

MaMkhize then reflected on all the success she’s had in spaces where people didn’t think she would thrive.

"All my life I've celebrated people, I've loved people but they've loved themselves and nobody loved me. So this time around, I love myself and I ...
TshisaLIVE
1 year ago

Talk about levels!
TshisaLIVE
1 year ago

'At the end of the day I am human and I put effort in everything I do. It's not because there's money.'
TshisaLIVE
1 year ago

"It’s obvious there’s something about me and it’s not just about the money," MaMkhize explained.
TshisaLIVE
1 year ago