Anele Mdoda also topped the trends list after she was caught in the crossfire... 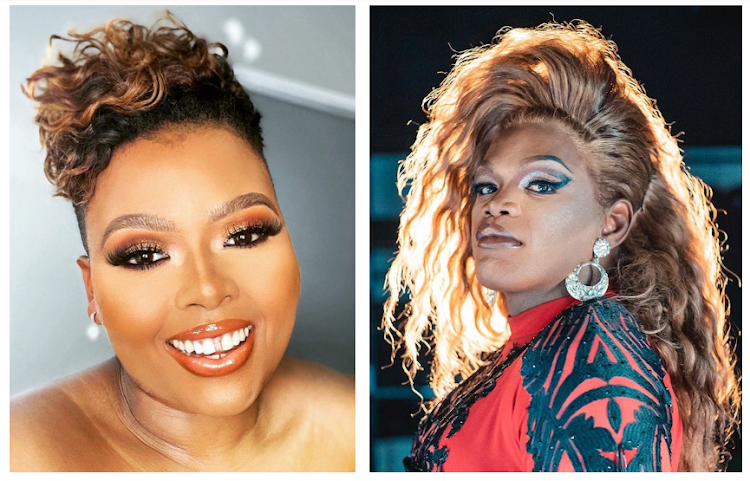 Media personality and drag queen Siv “Sivanna” Ngesi was the talk of the town on Twitter after DM conversation came to light of the star asking a tweep to mind his tone when calling him out for allegedly not being a true ally of the LGBTQI+ community.

Siv was dragged by members of the rainbow community who expected him to speak out prominently on the murder of Andile “Lulu” Ntuthela, from KwaNobuhle in the Eastern Cape.

HeraldLIVE reported that the mutilated and burnt remains of Lulu were discovered in a shallow grave, only a few paces from his alleged killer’s front door.

In the lengthy DM conversation that made its way onto the TL, the upset tweep asked Siv to rally his networks, brands and associates to help raise awareness about Lulu's murder and bring justice.

“You’re a queer rights activist according to you and the bags you eat. A queer body was mutilated and buried in a shallow grave. I don’t care if you haven’t been online or whatever — you have a responsibility to be on the fu***ng ball as an ally (as you claim).

“Engage with #JusticeForLulu right now, Siv, and get your networks, brands and associates to do the same,” said the tweep in the direct message sent to the actor.

Siv seemed to have understood the man’s plea, but pointed out that he didn't like the “tone” he detected in the DM.

“On It. Didn’t see anything about it. I need to add something: You don’t know me.

“You don’t know who I am and what I stand for. Please watch your tone with me! We aren’t friends. I do what I can. I fight battles I see! I have shared and will keep sharing,” said Siv.

private engagements, private gratitudes. public engagements public gratitudes. I’m not going to be that tool for you. Here is our interaction for reference bethuna (1/2) https://t.co/l8TO09WDuh pic.twitter.com/tjN5AJtCg8

Upon reading the interaction, more tweeps called Siv out and reminded him that he's the one who called himself an ally of the community.

They said if he can get gigs as Sivanna then he shouldn't have a problem with anybody's “tone” when calling him out for not doing the most he can with his platform.

This was when, without mentioning names, media personality Anele Mdoda got caught in the crossfire. Tweeps interpreted her tweet about people being bullied into making statements to be in Siv's defence.

“If you want to make a statement by all means. If you want to keep quiet, that is fine too. What you can't do is bully people into making a statement,” Anele wrote. “The bullying you speak of so much on this app, that's it. You really want to believe Twitter is different from society.”

If you want to make a statement by all means. If you want to keep quiet, that is fine too. What you can't do is bully people into making a statement. The bullying u speak of so much on this app, that's it.U really want to believe Twitter is different from society.

As she climbed up the Twitter trends list, Anele added, “This thing of forcing people to have a say on something is gutter as hell.”

“All incidents hit people differently. Perhaps the one person you are pushing to have a say is busy dealing with their own issues over said incident. Just stop.”

This thing of forcing people to have a say on something is gutter as hell. All incidents hit people differently. Perhaps the one person you are pushing to have a say is busy dealing with their own issues over said incident. Just stop.

While some agreed with her, many were not here for it and continued to drag the pair.

These celeb LGBTI allies only acknowledge the queer comm when its beneficial. They enjoy the benefits of queer image by appropriating gay culture, but avoid the full responsibilities of the social implications that comes with being a queer person. Dressing in drag is not enough

I am heartbroken over Anele's stance on this. Siv is not a victim. He gets paid for appropriating queer culture, but doesn't want to be called out for being quite when queer people are killed? Please make it make Fucking sense!

No but Anele you can’t position yourself as an ally but when it’s time to do the work that actually matters it’s radio silence. But when it’s time for Ivy park deals you’re the first in line? Nah pls respect us https://t.co/BSkaH9F11b

I love you Sisi Anele but I have to disagree with you, for instance you can't be a Miss SA and be silent about GBV and suicide matters, why are you even wearing the crown? https://t.co/aYKhs9QjlL

Mmusi Maimane said Sivanna should not be criticised for shining the spotlight on drag.
TshisaLIVE
5 months ago

OPINION | Don't be mad at Sivanna, be mad at SA and all the brands that have refused to see you!

The anger towards the country being 'blind' to your existence is right and should continue... but it isn't Sivanna's fault, writes Chrizelda Kekana ...
TshisaLIVE
5 months ago

"It means your are failing sir!" Anele to President Buhari.
TshisaLIVE
4 months ago