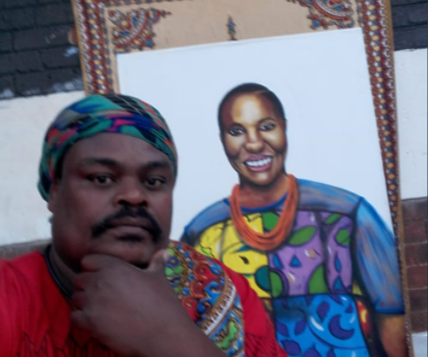 Rasta 'honoured' Dr Sindi with a painting, but tweeps were not thrilled about it.
Image: Twitter/Rasta

Painter Rasta has rubbed salt in the wounds of many of Dr Sindi van Zyl's fans after he honoured the late Dr with a painting that many felt did not resemble the people's doctor at all.

Dr Sindi died on Saturday after a struggle with Covid-19. The 45-year-old medical doctor and mother spent two months in hospital.

Tweeps were hopeful that Rasta would sit out drawing their beloved Dr Sindi but there was no such luck and they were disappointed to find that Rasta was just saving the reveal for the day of her funeral service.

Social media users were far from impressed and filled the TL with complaints about Rasta's paintings, with many realising there was not much they could do except complain.

“This Rasta is becoming useless, this guy clearly knows how to draw. We saw it with King Zweli, why can't he do the same with Dr Sindi? asked one tweep.

“Rasta needs to be stopped. That painting of Dr Sindi is utterly disrespectful,” added another.

“Rasta finished things off with a dress for Sindi ... the disrespect,” added another tweep who noticed that Rasta also wore a #DressForDrSindi with bold colours and pockets.

Here are some of their tweets expressing just how disrespected Rasta's “art” left them feeling.

It’s Rasta posing in a dress with pockets for me 😂 He said, “I’ll disrespect the Sindi’s face AND mock the cause. Whatchugonnado?” pic.twitter.com/410C0MQBed

I dunno if its only me or what, I've seen Rasta's paints and all but when it comes to DR Sindi, it hits different. This is not funny Bhuti'Rasta. I'm actually shattered. pic.twitter.com/Fj358Pg8cj

Rasta please focus on painting Prince Philip and DMX and leave Dr Sindi Van Zyl out of this . Thank you sir. pic.twitter.com/Iy7MTivOBS

During the service, Dr Sindi van Zyl was praised for her kindness and for being forever willing to use social media to educate the public about ...
News
3 weeks ago

Dr Sindi was such a rare kind of human.
TshisaLIVE
3 weeks ago

Her loss has sent shock waves through SA's rich and famous.
TshisaLIVE
3 weeks ago

Former broadcaster and medical doctor Sindi van Zyl is being remembered for her love for fashion, her profession, family and helping people.
News
3 weeks ago
Next Article