‘She was a beautiful soul’: Nelli Tembe remembered as hard worker not spoilt by rich family

AKA has received support from his industry friends as he mourns the death of his fiancee Nelli Tembe.
Image: AKA/ Instagram

Before she was thrown into the spotlight as the fiancée of one of SA’s best-known musicians, Anele “Nelli” Tembe was a budding chef with big dreams.

The 22-year-old died last Sunday after falling from the 10th floor of the five-star Pepperclub Hotel in Cape Town. Police say the incident is under investigation.

While many mourned the passing of “Nelli, the fiancée of rapper Kiernan ‘AKA’ Forbes”, those who knew her more intimately grieved at the loss of a young talent.

Born on October 11 1998 in Durban to Moses Tembe and the late Lulu Tembe, Nelli Tembe attended Glenwood Preparatory School and Durban Girls College, where she excelled in sports and arts, including ice skating, soccer, ballet and modelling.

She was captain of her soccer team and tried acting but ultimately found her calling in the kitchen. After matriculating she enrolled at the internationally acclaimed Jackie Cameron School of Food and Wine in the KwaZulu-Natal midlands in 2018.

Displaying much of the same drive that made her father one of KwaZulu-Natal’s most prominent businessmen, she immediately made her mark. When told how tough the career was, she told Cameron she would do whatever it took to impress.

"She said she was going to prove us all wrong, this is what she can do and will do - and she ended up doing it".
TshisaLIVE
1 year ago

Cameron recounted an occasion when students were tasked with putting on a high tea, complete with décor for the event.

“Everyone had to decorate their tables [and] most students bring a few boxes of things. Anele brought an entire truck. It was like a décor shop was coming in. Because of her family, she was exposed to many restaurants and knew what fine dining was.”

Still, she wasn’t scared to roll up her sleeves and get involved in the kitchen.

“She kept her life private. Social media for her was a place to show the stylish Anele, but we have videos of her waking up and putting on her chef’s uniform. That was a very different Anele from the one portrayed on Instagram. There was a lot more to her.”

She quickly excelled in class and for six months was placed at Luke Dale Roberts’ The Test Kitchen in Cape Town, where she was apparently offered a full-time position.

“When I heard what had happened on Sunday I went cold,” said Cameron. “I messaged her straight away and didn’t hear anything. Then I messaged her dad and he immediately confirmed it.”

She kept her life private. Social media for her was a place to show the stylish Anele, but we have videos of her waking up and putting on her chef’s uniform. That was a very different Anele from the one portrayed on Instagram. There was a lot more to her

Witnesses at the Pepperclub Hotel said they heard a woman screaming on Sunday morning, followed by a thud and a man shouting. A witness also reported hearing a man crying, adding that Forbes and Tembe had been seen in the hotel elevator the previous evening looking “loved up”.

Paramedics were called and were told someone had fallen from the 10th floor. Netcare 911 spokesperson Shawn Herbst said they found a naked 22-year-old female in critical condition.

“She had sustained polytraumatic injuries ... and they started a full life-support resuscitation. Unfortunately, her injuries were too severe and she was declared deceased.”

It was a tragic end to a romance that had captured the attention of the nation for more than a year and started when a paparazzi-style video of the pair kissing went viral. At the time, Forbes had just confirmed his separation from DJ Zinhle Jiyane, the mother of his daughter.

Forbes co-wrote a song with Tembe and she modelled his latest fashion range. The couple ended 2020 beating back break-up rumours on social media and in February they announced their engagement. 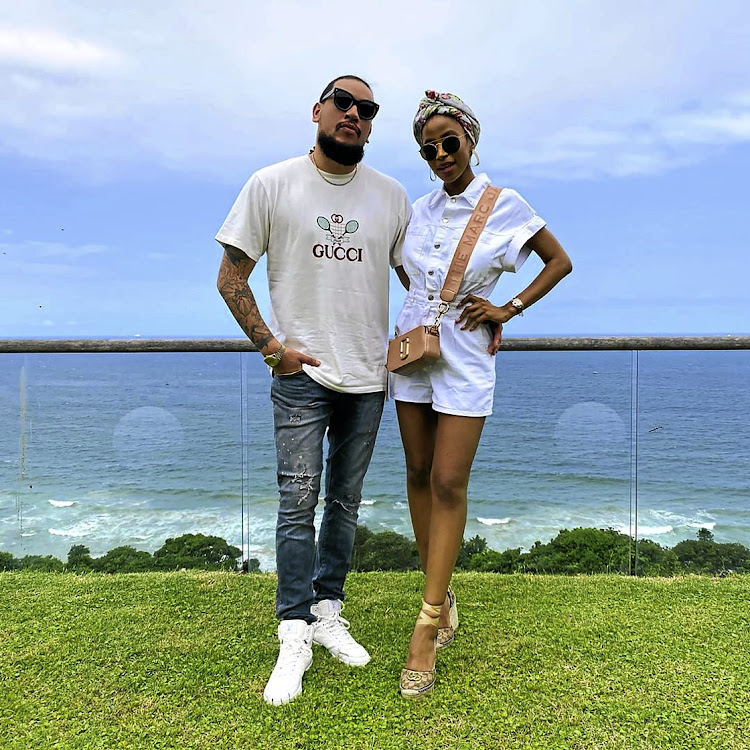 Tembe wrote: “Words cannot describe how grateful I am to be your life partner. Even through the highs and lows, you have always stood by me and I thank you Kiernan Jarryd Forbes for loving me wholeheartedly and never giving up on us. Cheers to the beginning of forever.”

A month later Forbes met the Tembe family in Durban to negotiate lobola and hinted at broadcasting the wedding in a TV special.

The couple seemed to be on cloud nine as they set off last week for Cape Town, where Forbes was booked to perform. They spent Saturday shopping at Laduma Ngxokolo’s MaXhosa Africa store and having lunch with friends below Table Mountain.

As news of Tembe’s death circulated on social media, the Forbes and Tembe families issued a statement confirming her death and describing her as “an exceptional and gifted young woman”.

Her family also spoke fondly of how she cared deeply for those close to her and loved being around younger family members.

Forbes was “inconsolable” and undergoing grief counselling. Friends and close family rallied around him. His mother, Lynn, and father, Tony, travelled to be by his side.

The star’s publicist, Pumza Nohashe, said Forbes had “lost the love of his life, someone he had taken advanced steps, culturally, to spend the rest of his life with”.

On Wednesday Forbes took his final — and most difficult — trip with Tembe, accompanying her body to Durban for her memorial service and funeral. 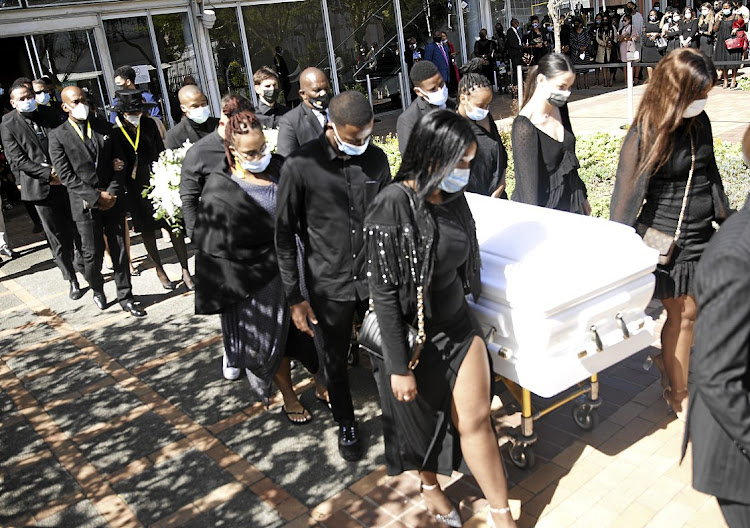 Friends and relatives escort the body of Nelli Tembe at her funeral at ICC in Durban.
Image: Khaya Ngwenya

The rapper did not speak at either ceremony but a representative extended condolences to the Tembe family on his behalf and shared how Tembe had become an integral part of the rapper’s circle.

“She not only loved Kiernan but extended that love to all those he loved,” said Forbes’s close friend, Jabu Nkabinde. “Our gatherings will never be the same without her, but we know her spirit and beautiful smile will shine bright on us.”

At the funeral, Tembe’s father denied his daughter was “chronically suicidal”, telling mourners: “I cannot allow an unfortunate narrative to go unchallenged.

“Until Anele turned 21, [she] would not consider taking her own life as the solution. Not a single member of her family, my family, would have associated her with suicide.

“As Anele’s father, I hereby categorically state that Anele was neither suicidal nor did she commit suicide. We must understand the forces that put us in the situation we find ourselves in. We must, as a matter of extreme priority, deal with the scourge that bedevils our youth: alcohol and drugs.”

Tembe’s uncle, Bongani Tembe, said her father adored her and she and Forbes were clearly in love. “Anele was a beautiful soul, and in our grief let us smile, knowing she is now in the presence of the Almighty and probably hugging her mother. I believe her life will not be in vain,” he said.

Tembe is survived by her father and stepmother, Princess Ntandoyesizwe, the daughter of the late Zulu king Goodwill Zwelithini. 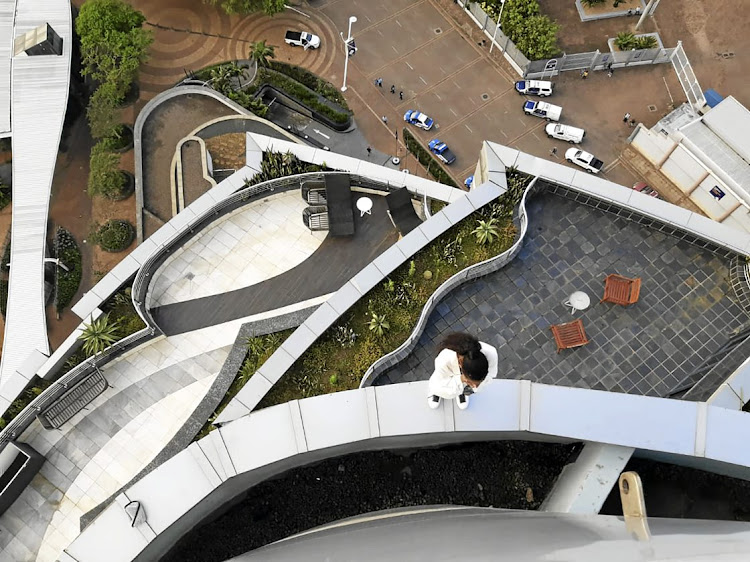 On December 11, Nelli Tembe cut a lonely figure standing on the edge of a ledge on one of the top floors of the iconic 19-storey Hilton Hotel in Durban just before 8am. The Sunday Times can reveal that a risky rescue was being planned as emotional scenes played out in a 50-odd-minute standoff that could have ended tragically.
Image: Supplied

Was tricky rescue a foretaste?

On December 11, Anele “Nelli” Tembe stood on a ledge near the top of the 19-storey Durban Hilton Hotel just before 8am. A risky rescue was planned over an emotional 50 minutes.

Sources with knowledge of the incident said Tembe was consoled and counselled by her cousin, who stood a few metres away, while a team of first responders and hotel staff worked in the background.

Tembe became emotional and distracted. In a split-second gap, police rescuers saw a chance to snatch her to safety.

Sources said Tembe was aggressive when they grabbed her. “Outside of an emotional state she was highly aggressive — she was clearly confrontational. ‘Leave me, I want to die’ ... she kept on saying that while fighting off the police.”

A hotel worker said her fiancé, rapper AKA (Kiernan Forbes), was in the hotel but not at the scene.

“We could have asked him to come out but she may have just jumped. Her cousin was present the whole time, but the minute the cops arrived she became very aggressive,” said the hotel worker.

“We kept on encouraging her cousin to keep talking to her ... She turned around for a split second and started crying in her hands.

“In that moment the officers ... grabbed her. It was such a tense and risky move.”

Tembe was taken to hospital.

"My name is Anele but I am not my name. I don’t see myself being enough to anyone, even myself. I am more than enough."
TshisaLIVE
1 year ago

"It's an unexplainable feeling to be standing in your home without you here."
TshisaLIVE
1 year ago

"I knew Kiernan loved my daughter but their companionship needed more than love."
TshisaLIVE
1 year ago

Views of the hotel where Nelli Tembe and AKA spent their last moments together.
TshisaLIVE
1 year ago