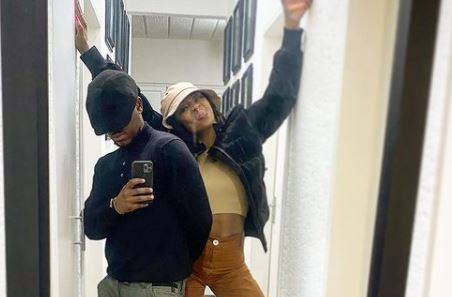 Black Motion's DJ Murdah Bongz swept DJ Zinhle off her feet when he gifted her with an “amazing and thoughtful” life-size portrait to adorn a wall in her house.

Murdah Bongz and DJ Zinhle seem to be past the stage of buying each other chocolates and flowers. Instead they've taken things up a notch. They also don't skip a beat when it comes to publicly supporting each other.

While Zinhle and Murdah have not yet officially confirmed swirling speculation that they're an item, their social media posts tell a story.

Taking to her Instagram on Tuesday, DJ Zinhle thanked Bongs for the portrait — a black and white simplistic painting of the DJ — which she uses on some of her merchandise. Zinhle said the size of the framed portrait made her huge chandelier fit better in her house.

“Thank you for this amazing and thoughtful surprise Murdah Bongz,” she wrote with a heart emoji before adding, “This portrait makes my huge chandelier look so small.”

Check out the portrait below:

Even though the pair have not publicly announced that they're together, the rumour mill has been swirling around their relationship status since mid 2020.

They have also been sharing loved-up snaps of each other on their Instagram Stories and social media TLs which has kept the rumour mill going.

In one of his posts, Murdah couldn't help but gush over Zinhle. Appearing totally smitten, Murdah praised Zinhle for being the best in the music game and in another the musician referred to Zinhle as his “future makoti”.

The pair also seem to inspire each other as Zinhle's recent move of acquiring equity in Boulevard Nectar Rosé seems to have ignited Murdah's drive to launch an alcohol brand of his own.

Taking to his Instagram, Murdah announced  he's launching Black Stream Gin in September,  and Zinhle commented she was “ordering for sure.”

“Exclusive and additional flavours launching post September. Remember always those who say it cannot be done, should not interrupt those doing it. It’s possible black child, believe in yourself and dreams!”

"This is why we dream big. Why we work late, why we say no to others and yes to ourselves."
TshisaLIVE
1 month ago

Is it safe to say DJs Murdah and Zinhle are a real thing?
TshisaLIVE
4 months ago

DJ Zinhle's boss moves pull her effortlessly through the pandemic

Murdah and Zinhle's love for one another is too cute for words!
TshisaLIVE
4 months ago
Next Article