“The tragic loss of Anele has taken a great toll on me, emotionally and psychologically.”

AKA says every day has felt 'like a mountain to climb' since his fiancée' Nelli Tembe's death.
Image: Instagram/AKA via welcometoromesa

Rapper Kiernan “AKA” Forbes has broken his silence on the death of his fiancée Anele  “Nelli” Tembe, opening up about his heartbreak and the toll on him “emotionally and psychologically”.

Nelli died on April 11 after apparently falling from the 10th floor of the Pepperclub hotel in Cape Town. At the time of her death, those close to AKA said he was beside himself with grief and had sought counselling.

In a statement to TshisaLIVE on Thursday, AKA described the pain of losing the “love of his life”.

“Every day feels like a mountain to climb. I miss Anele, so much and I'm heartbroken at the unfulfilled life we had planned together.”

The pair got engaged in February and a few weeks later AKA met with Nelli’s family to start lobola negotiations.

“The tragic loss of Anele has taken a great toll on me emotionally and psychologically. Insinuations and innuendos made on my personhood have made it even more difficult to process, and the strain our families have taken is unspeakable.

“Which is why at this time I choose to retreat to honour my journey, praying that the moments of stillness may bring me closer to some clarity,” he explained.

The star has also handed over his social media accounts to his management to run during this period of mourning.

“Please respect our privacy as we go through our grieving process, and please continue to keep our families in your prayers.”

He thanked his family, including his parents, friends and fans for their support over the last two weeks, saying the MEGACY's love had brought him comfort.

Earlier this week, police told TshisaLIVE the incident was still being investigated with “no new developments to report” and “detectives are following up on all leads”.

At her funeral service last week, Nelli's father Moses Tembe told mourners he did not believe his daughter was “chronically suicidal”, saying: “I cannot allow an unfortunate narrative to go unchallenged.

“Until Anele turned 21, [she] would not consider taking her own life as the solution. Not a single member of her family, my family, would have associated her with suicide. As Anele’s father, I hereby categorically state that Anele was neither suicidal nor did she commit suicide.

“We must understand the forces that put us in the situation we find ourselves in. We must, as a matter of extreme priority, deal with the scourge that bedevils our youth: alcohol and drugs,” he said. 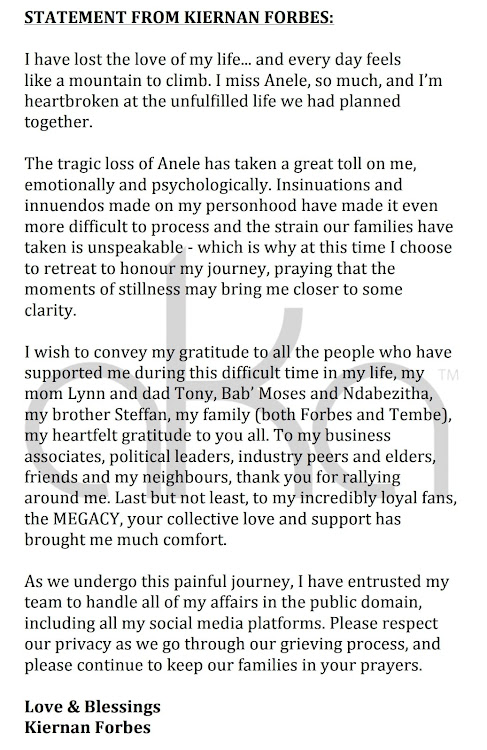 "I knew Kiernan loved my daughter but their companionship needed more than love."
TshisaLIVE
9 months ago

"Our gatherings will never be the same without her, but we know her spirit and beautiful smile will shine bright on us,” AKA's close friend Jabu ...
TshisaLIVE
9 months ago

“It hurts that she’s gone. It’s difficult to accept, but at least I know she’ll be at peace. I just want you to know that I love you, and sorry ...
TshisaLIVE
9 months ago

"My name is Anele but I am not my name. I don’t see myself being enough to anyone, even myself. I am more than enough."
TshisaLIVE
9 months ago