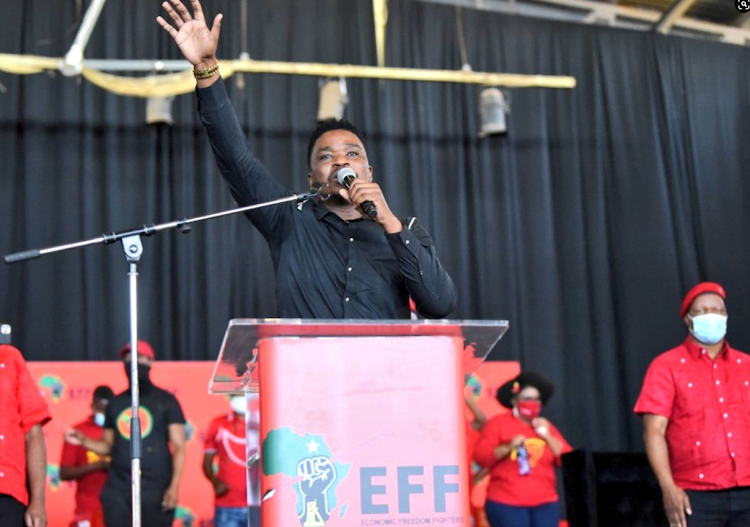 Gospel musician Dr Tumi was thrust to the top of the Twitter trends list on Tuesday as scores of social media users expressed their opinions about him attending and performing at an EFF Freedom Day event in Tshwane on Tuesday.

Scores of EFF supporters gathered in Atteridgeville where party leader Julius Malema delivered his speech. The gospel star performed and opened the event with prayer ahead of Malema's address.

Dr Tumi and his wife Kgaogelo Sara Makweya are facing fraud charges for allegedly defrauding the National Lotteries Board of R1.5m. The pair allegedly received about R760,000 from the funds. They are out on R3,000 bail each, and their case was postponed to May 7 for docket disclosure.

The EFF received mixed reactions from social media users. Some criticised the party for associating itself with the musician. Others came to his defence, saying Dr Tumi has not been pronounced guilty by a court of law.

For others, it was no shock seeing him perform at an EFF event as party MP Mbuyiseni Ndlozi publicly supported the musician at the height of public condemnation after his arrest for alleged criminal conduct.

Here's what social media users had to say:

The EFF might as well have just called ubaba to come sing a duet with Dr Tumi.... 🤣😅#malema #EFF pic.twitter.com/EmYhZhwtbw

The support that Julius and EFF is giving Dr Tumi during this hard times must never go unrewarded. Dr Tumi on stage now at #EFFFreedomDay

Which court found Dr Tumi guilty of anything? Does his bail condition prohibit him from attending EFF events? Not so long ago, Saldhana Bay Mayor Marius Koen was found to have falsified his qualifications. He's still DA Mayor. The less said about ANC, the better.

The EFF: the home of all those who steal, allegedly. https://t.co/k8XvCENUdl

We can't be crying about corruption in the ANC only for the EFF to keep praising people accused of fraud, you see why these so called opposition parties will never unseat the ANC?

Also, many people are hypocrites, if Dr Tumi was a white member of the DA there world be an outcry.

We are proud of Dr Tumi, our very own successful South African doctor and international musician.

One thing I've learnt from white people is that they don't abandon their own no matter what they've done.

The man who opened a fraud case that led to the arrest of gospel musician Dr Tumi says he did not know that the singer was involved in the matter.
TshisaLIVE
5 months ago

Dr Tumi tight-lipped on fraud charges against him and wife

Dr Tumi thanked his fans for their "understanding and support" amid fraud allegations against him.
TshisaLIVE
5 months ago

The EFF's Mbuyiseni Ndlozi says 'no weapon' formed against Dr Tumi shall prosper.
TshisaLIVE
5 months ago