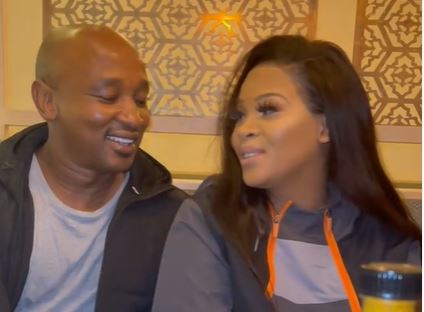 Amapiano DJ Lady Du, real name Duduzile Ngwenya, has opened up about meeting  her soul mate, former Isibaya actor Andile Mxakaza, at the height of her depression and how his love became her lifeline.

Taking to Instagram to celebrate the actor on his birthday, Lady Du penned an emotional letter to Andile in which she paid tribute to him for the part he has played in her life since they met during a dark time in her life.

“Last March before lockdown I met Andile and we started talking. I was not in a good space so he was really patient with me. Four months before that I was discharged from hospital. I had depression to the point where I tried committing suicide. It was the hardest time of my life,”  Lady Du said.

The DJ said she had lost her family and was navigating the hardest time of her life alone.

She went for counselling and after her last session, her therapist advised her to go out for what would be the first time in a while.

“Guys, I swear it was like God brought him straight from heaven. We’ve known each other for years. He looked at me asked me if I’m OK. I said no and started crying. We spoke for three months guys. Three months nothing happened. It was like he was counselling me again.”

The DJ said Andile left her pleasantly surprised with his actions, including praying with her and becoming her confidant. It wasn’t long until he promised her he’d never leave her.

“Four months later he made a promise to me. His words were something like unlike all the people who left me and have been hurting me, he’ll stay forever. I really thought he was bullsh***ing. A week later he bought a ring. This was before he even touched me intimately. He said ‘I want to make you my wife, I know your personality, I know how kind you are. Please be my wife’,” she reflected.

Lady Du said she was always in awe of the royal treatment she receives from Andile and was grateful that thanks to his presence, she’s even managed to reconcile with her family.

“From that day I’ve been treated like a queen, taught a new kind of love. Respect, unconditional love, family, that I even spoke to my family and fixed things with them.”

Fans of the pair were impressed when the DJ recently revealed she received her birthday gift early when Andile  surprised her with a new “upgraded” engagement ring.

Andile and Lady Du started dating early last year but Andile knew he’d found the one and asked Lady Du to marry him in August 2020, three months into their relationship.

Fast forward to May 2021, the pair have been living blissfully and Andile felt his hard-working wife-to-be deserved a bigger rock on her finger, so he roped her brother in to help him plan a surprise “ring upgrade proposal” earlier this week.

Surprised when she saw the bag from the jewellery store, Lady Du shed tears of joy when she realised what Andile had done. She took to her Instagram to share the moment.

“We got engaged last year August, three months into the relationship. I’ve never been so happy my entire life. Today he decided to upgrade my ring. It’s our birthday month. Since I’m busy he and my brother planned all this. Andile, I love you king. I really have no words ”

"We got engaged last year August, 3 months into the relationship. I’ve never been so happy my entire life. Today he decided to upgrade my ring," Lady ...
TshisaLIVE
1 year ago

Norma bust a move and had the streets shaking!
TshisaLIVE
1 year ago

Isibaya actor Andile Mxakaza: My mentors made me the great artist I've become

The man behind Isibaya's Fezile is a mystery to many and actor Andile Mxakaza has told TshisaLIVE that its a result of a conscious decision he took ...
TshisaLIVE
4 years ago