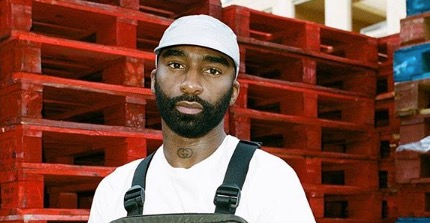 Even if you are the biggest fan on the planet, shouldn’t you consider if Riky Rick would be OK with you touching him?
Image: Riky Rick/ Instagram

The relationship between a fan and a celebrity is unique. You are complete strangers, but a fan will know everything there is to know about their idol, down to the type of underwear they wear.

However, this doesn’t mean the need for basic boundaries shouldn’t exist, even if lines seemed to have be blurred in the latest news from Mzansi celebville. Here is a PSA (public service announcement) for both parties involved: Fans, celebrities are still human, and celebs, your fans are too.

While the Covid-19 pandemic may not be over, performances by artists are lighting up stages with fans fawning and swooning over stars after a year of having little to no interaction with celebs. It’s no wonder fans have been over-zealous in their pursuit to meet the famous faces of the nation.

Last week, videos went viral of celebrities interacting with their fans on stage, and have made headlines for various reasons, bringing into question the limits between the two parties. Fans and celebs were seen getting quite intimate in their interactions on stage. Some interactions lead to an uproar online, with accusations of sexual harassment swirling on the internet.

Through these videos, celebrities have illustrated why the sense of over-familiarity their fans feel has lead to dangerous situations that can easily be avoided in the future.

From the moment we are born, humans have been taught to respect the personal spaces of others. It’s the basis of being sentient beings. Boundaries – literally defined as a line which marks the limits of an area – have helped society and humanity define what one is comfortable with in a relationship and how one would like to be treated by others.

These are standard in relationships with any other human, but somehow they are lost in translation when it comes to celebs and their fans interacting. Having consent to do anything to anyone should be the golden standard, Why does it feel like the lack of defined boundaries keeps reappearing in the conversation?

Rapper Riky Rick was seen tearing it up at a club in Namibia. Fans were cheering him on, the vibes were lit but a video of a fan licking his shoes went viral. Though Riky didn’t seem to stop the fan, it was clear the star wasn’t super keen on the fan going in on his shoe. Even if you are the biggest fan on the planet, shouldn’t you consider if Riky Rick would be OK with you touching him?

In a more hilarious moment, Zodwa Wabantu had a fan kiss her booty on stage after she asked the crowd to do so. Known for her close moments with devoted stans, this came as no shock to the nation. But it does point to why there is need for consent. With Zodwa and her fan getting close, it’s clear she is setting boundaries and making it clear they both got what they had asked for.

What really got tongues wagging over the past week was a video of Makhadzi and a fan dancing on stage. On stage, Makhadzi can be seen bringing a man from the crowd into her performance, leading to her twerking on the fan. Though many were under the impression the moment was consensual, tweeps accused the star of sexually harassing the man.

When TshisaLIVE reached out to Makhadzi’s team for comment on the accusations of sexual harassment, her PR manager Brandon Maseko said she was not available to comment.

Even if the allegations have not been addressed, fans shouldn’t be doing guesswork about whether a fan is comfortable on stage with their idol. Consent should always be present.

Celebrity culture over the years has disseminated the idea that no matter how famous or dedicated, there are no people involved, just fans and the famous. The lack of humanity that has come with fan girling, star power and making a name for yourself has led to people not treating each other as if they have a say in what happens to them.

Everyone involved needs to respect boundaries. At the end of the day, we are all humans with feelings of our own. Other’s people’s feelings should be considered before you interact with them.

Dear celebs - remember that even if you feel you have a personal connection with the people who look up to you, you don’t actually know them personally. Ultimately, they are strangers and reserve the right to their personal space. As the ones with the power in your interactions, your fans should feel safe around you through the boundaries you set.

Dear fans - celebs aren’t your besties. Just because you memorised your fave’s Wikipedia page does not mean you know them. You just know of them. Even if you think they would be “totally cool” with a fan touching them, don’t assume. Please remember they are humans with boundaries.

Having limits and boundaries can greatly benefit future interactions between celebs and fans. In a country where the blurred lines of consent and boundaries have negatively impacted our society, be considerate of each other.

Some felt that the stan went too far.
TshisaLIVE
4 months ago

In the past, the star has had intimate moments with her fans.
TshisaLIVE
4 months ago

A video of Makhadzi touching the male fan has gone viral, with the internet weighing in on it.
TshisaLIVE
4 months ago