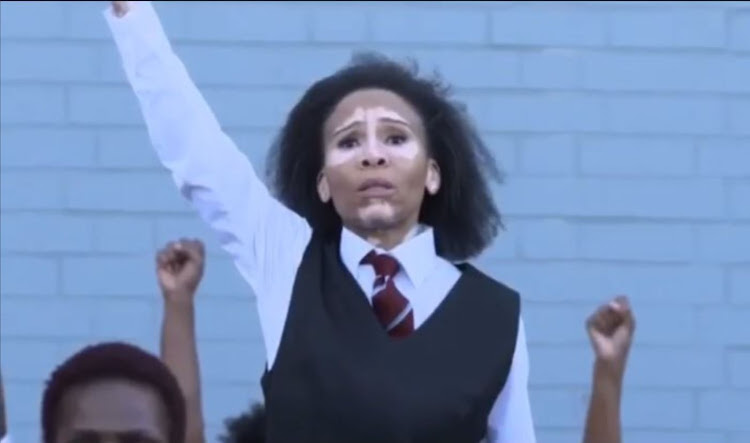 Led by legendary actress Leleti Khumalo, who played the lead in Sarafina! — the stage play and the film — the cast of Imbewu: The Seed re-enacted some iconic scenes from the show and created a dance challenge for the country to join in as they celebrated Youth Day.

It has become a sort-of unspoken tradition for South Africans to watch the 1976-inspired production on Youth Day. As people asked where and what time Sarafina! would air, the one-minute video of the Imbewu cast singing the theme song Freedom is Coming Tomorrow made its way to social media and took their breath away.

Mzansi marvelled at the video that went viral on Wednesday as tweeps expressed how timeless Leleti and her character Sarafina were.

“Watching the re-take of Leleti Khumalo's Sarafina! movement peace today had me with tears in my eyes. So much has changed yet so much has stayed the same in RSA! My heart aches for our nation & it's unrealised dreams. Dreams that inspire hate, anger and despondency among youth!” said one tweep.

“We stan the OG #Sarafina still looking and moving like it’s 1988, with that hair and black and white uniform. Leleti is a queen!” said another fan.

“Mam' Leleti Khumalo still has the same facial expression she had 29 years ago. An icon!” said another tweep.

“Leleti Khumalo is to Sarafina! what Henry Cele is to Shaka Zulu. Amazing work indeed. Well done to her,” added another tweep.

The videos of several re-enacted scenes trended on social media and even inspired other productions such as Tshedza Pictures to join in.

Here are other videos from people that joined the #SarafinaChallenge:

"The energy we have is for job hunting," wrote one user.
Politics
1 month ago

Somizi on his worth: ‘If you don’t have the budget for me, try next door’

Somizi opened up about honouring his parents by not compromising his worth.
TshisaLIVE
2 months ago

Somizi refused to share how much he was paid for the gig saying, "Ha! I don't owe anyone that information ..."
TshisaLIVE
1 month ago