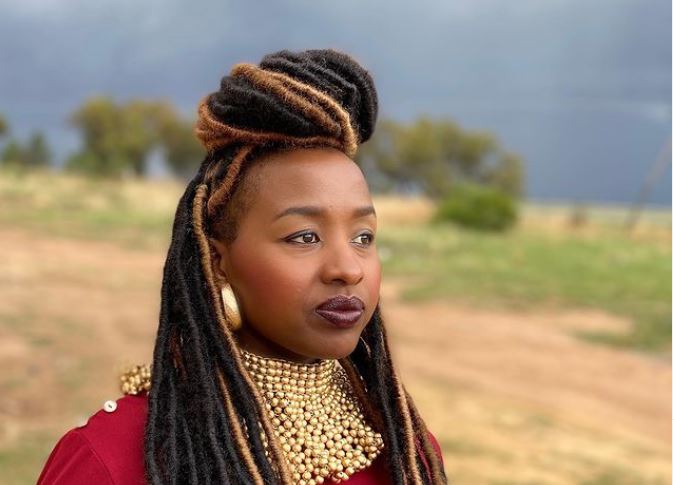 Scandal! actress Thandeka Nodada recently took back her power by going on a life-changing fitness journey that not only boosted her confidence but allowed her to tackle the role of Nonzi, a plus-size woman who is sexy and knows it.

Thandeka is busy shaking things up on the e.tv drama as the over-confident Nonzi who aims to leave Scandal! viewers glued to their seats.

In an interview with TshisaLIVE, Thandeka explained that Nonzi was the most interesting role she's ever played, adding that with Nonzi, she finally managed to escape being typecast as the rural wife.

“Nonzi is so different to anything I have ever played and that's what attracted me to her. I'm always — because of my body shape and how I look — cast as the rural wife or a mother or the first wife... so it's always the mommy roles, the auntie, the gossip and roles like that. So for the first time, I was very intrigued when I got the call saying Thandeka, come audition for this role.

“I was happy with the direction the role was going to take. I realised, this is different. This is a voluptuous woman who is sexy and owns it. She gets whatever she wants, she has affairs here and there, she lives for herself and she just couldn't be bothered. For me, already that was interesting because it's something I've never played before and something I am not,” she said.

Thandeka explained that as a plus-size woman herself it had taken her a while to get to a point where she could exude half the confidence her character Nonzi has. In fact, the actress shared that had the role presented itself three years before, she wouldn't have accepted it because of the space she was in during her personal fitness journey.

“I really enjoy playing Nonzi because I feel that she came through at the right time in my life. I went on a health/fitness journey — I was way bigger — then I lost about 20kg and I decided OK now I'm fine. I don't wanna be thin, I love my curves, I love my butt.”

From the moment her high schoolteacher recognised her passion for acting, Thandeka never looked back. However, she quickly learnt that the dry spells meant she needed a backup plan.

“I graduated and realised that it's not that easy for one to get jobs when you are acting. Just auditioning and always waiting on jobs is difficult, you can go three to six months without a job. That's when I decided that I don't want to leave the arts, so I started to equip myself with things that happen behind the scenes so that it doesn't push me out.”

Since then, whenever she isn't on the small screen Thandeka is busy behind the scenes and she loves each every role she plays both in front and behind the cameras.

The nation has said farewell to 'Scandal!' character Lerumo Chabedi.
TshisaLIVE
4 months ago

"The storyline was very personal for me, It became triggering because in the same year I shot the movie - in March - I lost a friend and until today ...
TshisaLIVE
4 months ago

Nomvelo Makhanya reflects on her nine-year journey with 'Scandal!' as Lindiwe

"I literally grew up with her," says Nomvelo on playing Lindiwe for nearly a decade.
TshisaLIVE
4 months ago

“Besides from the loss of taste and a little bit of the tight chest, I think the most difficult thing was isolating from each other in the house. We ...
TshisaLIVE
4 months ago